I’m up in northern Wyoming for a funeral. Always good to see the Big Horn Mountains again, and to spend time with family. The one good part of sad events like these is that family from long distances come together and stories get told that people haven’t heard before. Something about a person’s death unlocks old memories, as if their passing has opened a window into all of their life. 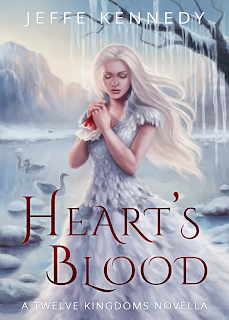 This week in the Bordello we’re discussing our favorite fairy tales. Come on by and find out about my current obsession. I’m over at Word Whores talking about the importance of book covers – and of having a good public persona.

In exchange for her father’s life, Amarantha agrees to marry the dreadful Beast and be his wife for seven days. Though the Beast cannot take Amarantha’s virginity unless she begs him to, he can and does take her in every other way. From the moment they are alone together, the Beast relentlessly strips Amarantha of all her resistance. If Amarantha can resist her cloaked and terrifying husband, she gains his entire fortune and will be allowed to return to her family and a normal life. But the Beast seduces her at every turn, exposing, binding, tormenting, and pleasuring Amarantha until she no longer knows her own deepest desires. Increasingly desperate to break the curse that chains his humanity, the Beast drives Amarantha past every boundary. But her desire for a normal life may jeopardize the love that will save them both.

I’m in New Orleans this week, attending the RT Booklovers Convention. I posted my “appearance” schedule last week. Alert readers will note that today, Tuesday, is *not* on this list. That’s because I’m hiding in my courtyard in the French Quarter getting my words in. The above is where I’m sitting as I write this.

A fun thing that I’m part of this year is a Freebie jump drive from Smashwords. Mark Coker blogged about it here. The drive contains 349 free books, including my Petals and Thorns. I mean this in the nicest way possible when I say I hope it’s a gateway drug for the rest of my books. 😀

Meanwhile, you might catch me wandering around the Quarter, but I’ll definitely be around tomorrow and the rest of the week! This week a group of us writer-types from SFWA (Science Fiction/Fantasy Writers of America) are staging a sale of sf/fantasy books. We’ll be nattering about this and cross-posting all over the Internet. This is an opportunity to pick up some good reading material at great prices.

The promotion lasts through Friday, February 21, and the following authors are participating: Amanda C. Davis with new takes on classic fairy tales in Wolves and Witches for $2.99, and also her fantasy novelette The Lair of the the Twelve Princesses for 99 cents. M.C.A. Hogarth with her aliens-only epic fantasy The Worth of a Shell at $2.99. Cat Rambo with her brilliant collections Eyes Like Sky and Coal and Midnight at $2.99 and Near + Far, also at $2.99. Don Sakers’ tale of futuristic psi and intrigue, The Eighth Succession at $2.99. Lots of fun new books to check out – I sure plan to! I’m over at Word Whores today, rhapsodizing about ocotillo blossoms and my self-publishing adventures – along with the three best resources I’ve found. Cute kitten pic of the day!

Today I’m over at Reading Reality, answering questions. They also did a lovely review of Rogue’s Pawn, if you’re not sick of reading about it yet!

Also, I’ll take a little break from the non-stop Rogue’s Pawn mentions to say that Sapphire won first place in the short erotica category of the International Digital Awards! Petals and Thorns also finaled, which is just lovely. And funny to me, because I’d had the impression that readers liked Petals and Thorns better than Sapphire. Shows you what I know! And that it always just depends on the reader at the moment. I’m over at Word Whores today for my Sunday sermon on self-publishing. And why Petals and Thorns has a new cover.