At last, the much-anticipated next installment in the Sorcerous Moons series, THE TIDES OF BÁRA is out! About and Buy Links at the bottom of the page.

Our topic at the SFF Seven this week is “My favorite great cautionary tale in the writing world.”

I could cite a lot of Great Cautionary Tales, but with NaNoWriMo (National Novel-Writing Month) on the horizon, I’m going to pick this one: Don’t Give Up.

Come on over to the SFF Seven to read more.

With her secrets uncovered and her power-mad brother bent on her execution, Princess Oria has no sanctuary left. Her bid to make herself and her new barbarian husband rulers of walled Bára has failed. She and Lonen have no choice but to flee through the leagues of brutal desert between her home and his—certain death for a sorceress, and only a bit slower than the blade.

A Race Against Time

At the mercy of a husband barely more than a stranger, Oria must war with her fears and her desires. Wild desert magic buffets her; her husband’s touch allures and burns. Lonen is pushed to the brink, sure he’s doomed his proud bride and all too aware of the restless, ruthless pursuit that follows…

A Danger Beyond Death…

Can Oria trust a savage warrior, now that her strength has vanished? Can Lonen choose her against the future of his people? Alone together in the wastes, Lonen and Oria must forge a bond based on more than lust and power, or neither will survive the test… Caught this gorgeous full moon setting in the warm sunrise colors on my run this morning. Glad I took my camera along. Although it annoyed me bouncing around, so I had to tuck it inside my zippered hoodie – which made me look pregnant, though unnaturally so.

This week at the SFF Seven – whether by deliberate ploy or mental lapse (there’s some debate on the topic – our calendar guru KAK missed giving us a topic. Therefore this week is an open “on-my-mind” theme.

What’s on my mind? I hate to tell you guys, but it’s marketing. And the love of money.

Our new creepy collection of toothy tales, TEETH, LONG AND SHARP, is out! And so gratifying to see it as an Amazon Best Seller. Many thanks to catnip author Ilona Andrews for giving it a shout out that helped push it there.

This week’s topic at the SFF Seven is all about “dead genres.” Come on over to find out what’s real and what isn’t. TEETH, LONG AND SHARP is out and doing quite well! So fun for me to see my pic next to my darling friend, Grace Draven, along with those lovely rankings. (The other authors are working on getting their pics up, too.)

Thanks to everyone for buying this collection! I hope it tickles your short hairs in just the right way. I haven’t read the other stories yet, but plan to spend some delicious time doing so this weekend. If you’d like to do the same, the buy links are here!

Wherever you are, I hope you’re safe and warm and have what you need. Duck those hurricanes! 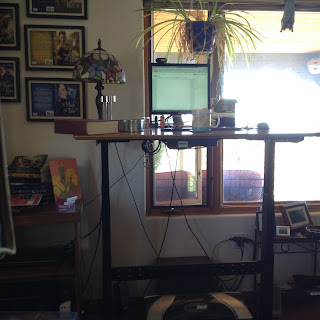 Our topic this week at the SFF Seven, as the post title implies, is where we do our best writing.

Mine is, as always, at my treadmill desk. Come on over to find out more!