Goodreads says I’ve written 191 reviews since joining Goodreads on June 29th, 2010. Apparently this puts me in the Top 1% of reviewers. Surprising! But kind of cool. 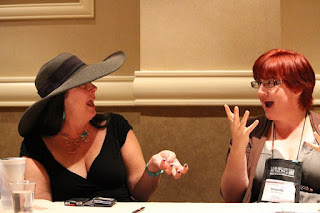 This is one of my favorite photos from the RT Booklovers Convention in Las Vegas last week. Darynda Jones and I were on a panel and I think we were laughing here about people dissing fantasy heroines as unrealistic while loving Conan.

Hard to say, but it makes me smile every time.

I’m over at Word Whores today (name soon to change!) talking about reviews, especially vicious ones. To celebrate that THE TALON OF THE HAWK won Best Fantasy Romance of 2015 from RT Book Reviews, I got this amazing tattoo of Ursula’s sword. I’m thrilled with how it turned out. (Freshly finished and a little red here – it looks even better now!)

If you haven’t yet signed up for my newsletter, one went out today with an exclusive, never-seen-elsewhere, juicy deleted scene from TALON. If you sign up today, you can still see it. Yes, I’m totally luring you. Is it working?

You’ll see this in the newsletter (hint, hint) – Kensington is sponsoring a Goodreads Giveaway of 25 copies of THE PAGES OF THE MIND. Hie thee hence to enter!

Finally, I’m over at Word Whores this morning, setting forth the question of whether published books contests that require an entry fee, such as RWA’s RITA Awards, have less integrity than those where books must be nominated, such as SFWA’s Nebula Award.

Joining me is Melinda Snodgrass, who’ll be signing The High Ground. This is a photo from the Tucson Festival of Books panel on Kickass Heroines in Fantasy. With me (from left to right) were Yvonne Navarro, Beth Cato and Judith Tarr.  Gini Koch (not pictured) moderated and a fantastic time was had by all!

But wait, there’s more! There’s awesomeness in the future as well.

For those of you in the Denver area, I’ll be at the Public Library Association (PLA) Conference on Thursday, April 7, at the Colorado Convention Center, 700 14th Street, signing at the RWA booth #1542 at 3:00pm. I’ll be signing my Award Winning (!!) third Twelve Kingdoms book, THE TALON OF THE HAWK. In fact, I have two cases to give away! So, come on by and snag you a copy.

Then on Saturday, April 9, I’ll be at another, much smaller PLA gathering in Gallup, New Mexico, at the Gallup Author’s Festival. The event is at the Octavia Fellin Public Library, 115 West Hill Avenue. (There’s a link here, but it takes some serious drill down. There’s another, shorter blurb here.) I’ll be on the 2:30 – 3:30 pm Books and Culture Panel Discussion in the Main Library Meeting Room and I’ll have many books to give away there, too! So if you’re in the neighborhood, come on by!

That night, Saturday, April 9, the hubs and I will spend the night in Flagstaff, Arizona. Would love to meet up with folks if you’re in that area!

Finally, on Sunday we’ll be moving on to Las Vegas, Nevada, and the RT Booklovers Convention! I’ll be there all week, on various and multiple panels, signings, parties, what have you. If you’re going, you’ll have access to all the agendas. On Friday night, April 15, I get my shiny shiny trophy for THE TALON OF THE HAWK as Best Fantasy Romance of 2015. If you’re NOT registered, you can still come see me at the Giant Book Fair on Saturday, April 16, 10:30 am – 2:00 pm.