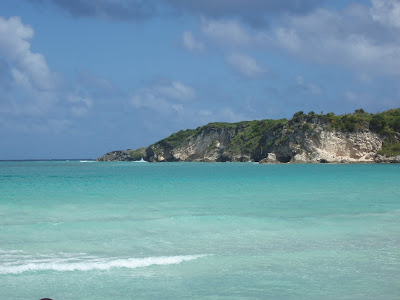 I’m starting to feel a bit done with winter and cold, so here’s a little slice of beach in the Dominican Republic for us to gaze at longingly.

Tell me again why we don’t all live in the Caribbean?

I know, I know – we couldn’t all fit on those little islands.

And we have these lives here, full of technology and working and Many Things To Do. Like email. Which is the topic of a little rant I’d like to share today. I’m going out on a limb here, but I’d like to stand up at the front of the room and say:

There is no excuse anymore for not being able to use your email.

There I said it. I know you’ve all been thinking it, too.

For a long time, the newfangled technology of the interwebs was optional. It started out as the province of antisocial geeks who lurked in dim little rooms lit only by computer monitors. Then the hip, young people starting using it, flinging superficial nonsense at each other across cyberspace. But I’d like to point out a glaring fact: we’ve had email, in one form or another, for over 20 years now.

It has become a standard method of communication for all businesses. Like it or not, email is as integral to our society, particularly our professional society, as cars and traffic are. Not knowing how to use your email is like not knowing what a red light means.

You can choose to be a Luddite, sure. Go find a lovely Caribbean island, hang on the beach, never look at the interwebs. It’s a deliberate choice. However, if you want to be online, email is the first, most basic skill to master.

I bring this up because the online chapter that I’m part of offers workshops. Online writing workshops of various types. People see them, sign up for them, and then inundate us with complaints that they’re not getting emails. This usually has to do with spam filters. Every email provider is different how they do it. But they all try to weed out the crap you don’t want from the sparkly stuff you do want. The spam filter is not a person, though, so the email user has to be intelligent enough to know what the spam rules are, and how to check to see that there’s no good sparkly stuff getting sent to trash.

Seriously, this is like knowing what side of the road to drive on. If you’re going to take your little car on the big internet highway, you have to know this stuff.

I know, I know – a lot of people are older and stars know it’s not easy to keep up with technology. At 44, I already feel a bit of sting here and there when I have to learn a new database or find the tool I need on yet another, more complex iteration of Word. My mother, however, who would kill me for revealing her age, can handle the internet technology. She is in no way a geek and never has been. She knows how to find her spam folder though.

So, I’m officially declaring that not knowing how to work your email is no longer an excuse. If you choose not to drive, fine. But, if you do, please take Driver’s Ed. Learn the traffic laws. Practice. Don’t go careening around the internet, crashing into other drivers and complaining that you don’t know how to drive.

Meanwhile, I’d like to leave you with the song I’m currently hooked on. It’s kind of sad, but it speaks to something I think we all feel at one time or another. I find it very moving. It’s from Amanda Palmer Goes Down Under, an album I’ve been listening to all week.