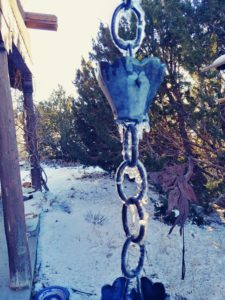 This photo is from a few weeks ago, but I think I never posted it. Ice on the rain chain and the fairy sculpture my mom gave me in the background.

It’s been a busy week for me so far. I’m making excellent progress on THE FIERY CITADEL (sequel to THE ORCHID THRONE). I’ve also been making daily inroads on collecting my income tax information for my CPA. And there’s been a lot going on with Science Fiction and Fantasy Writers of America (SFWA) – where I serve on the Board as a Director at Large – both the peaking of some planned projects and dealing with some problems. We also have elections going on, so yesterday I took some time to answer the “Questions for Candidates” on the SFWA forums.

One person asked the candidates if we’d to prioritize our SFWA work above everything else in my life. I said no. I added that I’d never expect that of any SFWA volunteer.

Hell, I’d never expect that of anyone, for any activity in life. Not 24/7.

We talk a lot about work/life balance, or work/family balance. For me, my life runs the smoothest when I devote some time each day to my various commitments. I have my To Do List color-coded for various activities (I am the Spreadsheet Queen, after all) with time allotted to each. Getting word count happens first because I write best in the mornings and that’s how I keep the roof over our heads and food in the pantry. I also have categories for blogging or doing my podcast, for updating financials – which includes keeping track of royalties and getting money to authors who participate in anthologies with me – for exercise, for errands and household chores, and an hour a day for SFWA.

But overall, balance for me means making every day reflect the pattern I want my overall life to have – and that means some of everything that’s important to me.

Chatting with friends and hanging out with the hubs? Those things happen every day, too, but I don’t have to put them on a list. 🙂 I’m over at Word Whores, talking about balancing writing with real life responsibilities.