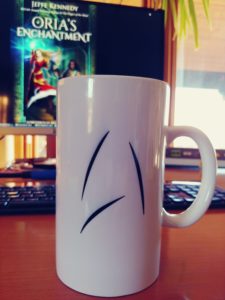 I lied a little in the comments this morning.

That’s what the comments section is for, right? Right??

Okay, no – I exaggerate. But one of my SFF Seven group-blogmates posted this morning about how much he loves the Star Trek franchise books, especially a particular set. We’re talking this week about books that people might be surprised we love. He certainly surprised me – and I commented that I’ve never gotten into reading any of the franchise books, meaning the books spun off movies and TV shows like Star Wars and Star Trek.

Which is largely true, but not precisely so.

See, I did try to read one, a long, long time ago, in a mall chain bookstore far, far away. It was not long after Star Wars Episode IV came out, which my parents took me to see on the big screen, dragging me along to their choice of movie as they always did, which then absolutely lit up my world. In the ensuing years – there were three years in real time between Star Wars and The Empire Strikes Back – I became addicted to Star Trek reruns on TV after school, discovered Anne McCaffrey wasn’t the only fantasy writer, and spent a lot of time and allowance money at that mall chain bookstore. Maybe it was a B. Dalton?

At any rate, I was dying to know What Happened Next in Star Wars, The Empire Strikes Back was YEARS away, and I spotted a Star Wars BOOK.

I tell you, angels wept.

I bought the slim paperback – I bet it wasn’t more than 200 pages – and eagerly began to read. What had happened to Leia, Luke and Han?? Well. The opening scene (or one of them) took place in some kind of pawn shop and culminated in a light saber (?) being thrust into a guy’s eye and bloody pulp flying everywhere. Then… I can’t even remember, but people were doing Wrong and Weird things. The characters weren’t like they were in the movie. It might have been that Leia, Luke and Han weren’t even IN it.

Angels were not amused.

This was long before I understood that a canon could be riffed upon. The book might have been written “in the world,” or – who knows? – might not even have been authorized. I have no idea now who wrote it or much more about it than the eye pulp flying everywhere.

Plus, that the story didn’t deliver anything like the movie had, and I was already well-aware that books are always better than the movie.

So, I never read another. That one book filled me with such loathing that I wrote off all franchise books as anathema. Now I’m wondering what I’ve missed…

What about all of you – do you read franchise books like this? Are there any you LOVE that I should check out???