I’m flying home from RT, where I got to meet the fab Linda Grimes in the flesh, and posting some conversation snippets from the convention over at Word Whores. 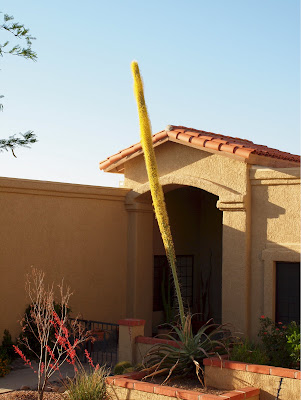 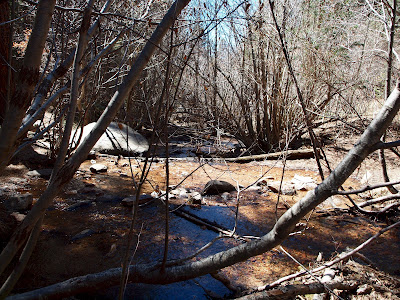 We’ve been hiking on the weekends lately. Doesn’t always make for panoramic photos, but it’s lovely and familiar to be up in the mountains and woods again.

The other day on Linda Grimes blog, she listed lessons learned the hard way and encouraged us to share. I mentioned one of my most salient in the comments and thought I’d share here. A bit of a Friday cautionary tale.

Not that any of you would do this.

Back when I was a kid, I went to this open-space elementary school, meaning we didn’t have classrooms or desks. We had chairs and tables for some activities, otherwise we sat on the floor a lot. Every day started with Magic Circle. We sat on the floor in – you guessed it – a circle, and went around discussing the topic du jour.

One day, one of the girls was all scraped up and bruised. She’d wrecked on her bicycle. She didn’t give many details except to say that she’d been riding her bike back from the pool and her hair was wet, so she shook her head to try to dry it. She finished with “Believe me: never shake your head while you’re riding your bike!”

Now, you have to understand the kind of kid I was. Something would never let me take anything anyone told me at face value. I always had to know why. Or how the person knew.

Yes, I drove my mother crazy. She sent me to school a full year early so someone else would have to answer my questions.

Very shortly after that, I’m riding my bike back from the pool, my hair is wet and I remember this story. Why, I wonder, would shaking your head make you wreck your bike? It made no sense to me.

And I can tell you the answer: when you shake your head while riding a bike, you lose some of your balance and you twist the handlebars. This drives your bike into the concrete curb, launching you over said handlebars to faceplant on the sidewalk.

Now we all know.

I don’t know if I ever explained to my mom just how I came to wreck on my bike that day.

Really, I blame it all on Magic Circle. Damn sharing. 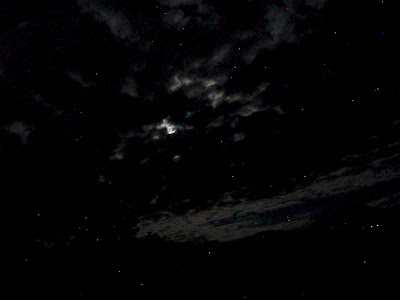 The moon behind the clouds last night. I nearly photoshopped out all the little points of light. I suspect they’re artifact – bits of reflected light – but I thought we could pretend they’re stars. On a cloudy night. See? We can have it all.

I am a fiction-writer, after all.

The writer Harley May sometimes roasts author photos, for her own twisted amusement, mostly. She roasted mine today. If you care for a good laugh, check it out.

I seem to be cutting a wide swath this week. Linda Grimes’ blog post today is a result of me Double-Dog Daring her. And Marcella Burnard’s blog post yesterday talked about a conversation we had about setting aside writing time. Must be my karma lately.

Either that or I spend way too much time yakking to people online. No, no – that can’t be it.

Apropos of that, a number of people have asked me if I’m doing NaNoWriMo (National Novel-Writing Month). I’ve blogged about this before, but I won’t point you to those posts because I’ve been kind of cranky on the topic in the past. Because, no, I don’t like NaNoWriMo.

A lot of people do. They love the feeling of community, the outside deadline to draft 50,000 words in one month. Several people got their first serious start at regularly scheduled writing through the project, so they have great associations.

I think I’ve mentioned plenty of times here why it doesn’t work for me, but enough people have asked that I thought it’s worth mentioning again. I’m not one of those organized bullet-point bloggers, but today I do have a list of my Four Reasons I Don’t Do NaNoWriMo.

1. It’s not about developing a regular writing schedule

NaNoWriMo is about a one-month blast of a hell of a lot of writing. With some exceptions, most writers, even those who get to write full time, don’t write that much in one month. People who commit to NaNoWriMo are making a pledge to do whatever it takes to meet the goal. That can be useful, but it’s important to me to fence off that regular writing time, write every day and make steady progress. If I stick to 1K/day, I can write 365,000 words in one year. I’m not meeting that goal yet, but it’s what I’m shooting for.

Because I don’t yet get to write full-time, I’ve found that 1K/day is about all I can handle and still be worth my salary. I can do more than that for short periods of time – I can write 5-7K in one day, when under pressure – but it drains me. I don’t know that I could keep that up even if I didn’t work full-time. Writing 50K words in November means 1667 words/day for thirty days in a row. That kind of pressure makes me crazy and, believe me, you don’t need me more crazy.

3. It doesn’t match my own method

To write that many words in that short a time means fast-drafting. That’s writing as fast as you can with no editing, no careful crafting. The idea is that writing fast removes barriers and frees you to simply write. There are many jokes that December and January are novel-finishing and editing months. That kind of drafting can be really great if you like to write that way, or don’t know yet how you like to write. I’m not much into fast drafting. I write reasonably quickly when I’m drafting, but I do go back and edit and reshape as I go. I produce pretty clean copy when I’m done. This is the method I’ve developed over about 25 years. It works well for me. Sometimes if I’m blocked, I’ll try the vomit/fast draft approach to get through the wall. Otherwise, I’m happy with how I work. I believe it’s important to find what works for you and, like nailing down a regular writing schedule, stick with it.

Okay, I get in trouble for saying this, but I’m endlessly amused that a guy started NaNoWriMo and picked November partly because of the Thanksgiving holiday. I’m sorry guys, but I think Thanksgiving ends up being four empty days for a lot of you and a whole bunch of work for a lot of gals. I know it doesn’t apply to everyone, but how many households have you been in when the men are watching football and napping on Thanksgiving and the women are cooking? I love Thanksgiving. I love cooking for it. But I spend a LOT of time preparing for it. And when I’m not doing the labor of love, I’m spending time with family. The day after Thanksgiving I get to spend shopping and having lunch with my mom and my stepsister, Hope. It’s a very fun day for me that I look forward to, but it’s not a day for catching up on word count. All of that is fine, because I have my regular schedule and I take holiday from it, just as I do from my day job.

So, that’s my NaNoWriMo Manifesto. (heh) But all of you digging in to do it, best of luck and full steam ahead. I’ll provide the pumpkin pie.