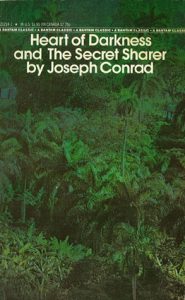 Our topic this week at the SFF Seven is The Book You Didn’t Want to Read and Ended Up Loving.

This was kind of difficult for me to answer, because most of the books that spring to mind when I cast back and try to recall which I didn’t want to read are the ones I ended up hating. If I ended up loving them, I kind of forget that initial pain. Like childbirth.

But I finally settled on HEART OF DARKNESS by Joseph Conrad, which I had to read for AP English senior year of high school. The edition above is the one I read – and still have. I know a lot of you hate it, but come on over to find out why it was pivotal for me.

Sorry – it’s not a pretty picture. And I suspect I don’t really have “fans” out there who will be looking for me in the wild chaos that is the RWA Literacy Signing. BUT, if you are out there and and want to plan ahead – you can find me at table 105, right by the cashiers. See? I put a little red smiley on it.

I leave on an early, early flight tomorrow morning and will be at #RWA12 all week. I’ll try to post pics, but you regular readers know how well I do at that. Best bet is to look for posts on Twitter.com (@jeffekennedy) or Facebook – Author.Jeffe.Kennedy lets you see stuff without being my friend. To see posts on Jeffe.Kennedy, I’m pretty sure you have to be a friend. But who understands how Facebook works anymore?

On to less frivolous topics…

I debated all weekend whether to say anything about the theater shootings in Aurora last Friday morning. I’m not sure I have anything substantive to add and it annoys me when people turn a tragedy like that into being about them. I don’t want to be all “look at me.”

But I feel like I want to say something.

I grew up in Aurora. My mom bought a house there in 1972, just before my sixth birthday, and she owns it still. When we moved in, the address was Denver, but the City of Denver ceded a section to the City of Aurora, as part of the redistribution of taxes in the rapidly growing metro area. These days you can’t really discern that you’ve driven from Denver to Aurora. Like many big cities, the metropolitan area of Denver incorporates many smaller cities and towns.

Which is why I always just say I’m from Denver. My mom was born and raised in Denver proper, and that feels no different to me than my own growing up. But my high school boyfriend and first love, Kev, who comments on here from time to time, often gives me grief for saying “Denver” instead of “Aurora.” For him I suspect it’s a loyalty thing. For me, it’s a “no one has ever heard of Aurora” thing.

Once we saw the news Friday morning, the internet network fired up. I figured Kev wouldn’t have been at that showing, because he’s not big on midnight showings, since he works early in the morning. And what were the odds, really? Finally, I texted him and, to my relief, he was fine. Then he said that he, his wife and son had gone to the midnight showing of The Dark Knight Rises – but at a different theater.

We all sent Facebook messages among my old gang of geeky friends who love things like Batman premiers and, amazingly enough, it seemed no one we were connected to had been there. Of course, our little burb has grown considerably over the years.

Yesterday, I looked at the list of the dead that the police finally released and found myself weeping over it. I didn’t recognize a single name. And I was grateful for that. It’s a strange place to be – thankful that the people you love aren’t the ones who died.

When I see those videos of the lionesses carving out a hapless gazelle from the herd while the others dash away, I wonder if they have a sense of gratitude, those luckier gazelles, that they can go back to grazing in the sun, because their number wasn’t up that day.

I don’t know what the take-home message is. All the conversations now are about controlling this – banning guns, carrying guns, anti-terrorist training, more security, more psychiatry. But, really, these things are the attacks of the monsters in the dark. It seems there will always be monsters lurking, taking a cut from the crowd. A choice as simple as preferring one theater over another can determine fate. There’s no controlling that.

Maybe all we can really do is enjoy the sunshine and the sweet green grass.

David took this picture. It might be my new favorite. Even my mom – the blonde behind the camera next to me – will like it because her glasses aren’t showing. She’s been having to wear glasses instead of contact lenses for the last couple of months, so her eyes will return to their natural state before her cataract surgery. Which is today.

We had a lovely weekend in the mountains, up at Snowmass in Colorado. Friends have asked what we did and I don’t have much to tell them. We sat on the deck. I got to read a lot. We drank wine and hung out. There were presents – and then tech support for the presents. Mostly I just enjoyed being with my family.

My stepsister, Hope, and her hubs and boys called and sang me Happy Birthday. Then she explained that the fabulous iced-tea maker she sent me from Teavana is in homage to my blog post about there still being more summer. It’s funny that she mentioned that post in particular, because it was one of the ones that no one commented on. Now, I’ve said many times that I will never be one of those bloggers who begs for comments. I read a lot of blogs and I don’t always comment. Usually I just don’t have anything in particular to say. But – every once in a while – it’s because the blog post annoys me in some way. So, of course, when no one comments on one of mine, a little niggly voice starts suggesting that everyone hates me.

Which leads to the eating of worms. Never pretty.

When I learn, then, that someone did read and even better, took that thought away from her, I feel the opposite way. Like making iced tea and guzzling it so that sparkling drops fly everywhere.

Writing is funny that way. Even blogging, which is more interactive than most writing media. It often feels like talking to an empty room. When someone answers, it can be astonishing. My long time friend, Kev, sent me a birthday email, just to catch up his end of the conversation – because he can’t always think of snarky replies to my blog posts. A little while back, this gal, Rachel, said something very nice to me about my writing and we chatted a bit on Twitter. In an attempt to convince me that she’s not a stalker (much), she mentioned that the fact that she’d planted cactus in her Kansas garden and was wearing a Cat Woman costume meant nothing.

Yeah, she cracked me up.

But more – it made me realize that people do listen. Even when we think they don’t. When they’re off being too busy to think up clever comments.

It’s a good thing to know. 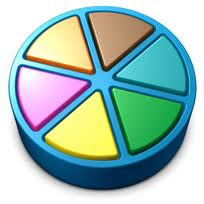 I’m at Word Whores today. Guess what I’m talking about. 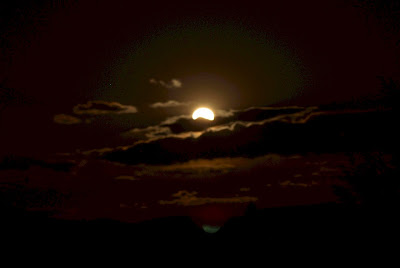 I did lower body weights at the gym this morning.

Usually when I weight-lift, I don’t listen to music. The treadmill absolutely requires my aerobic track to keep me distracted. For weight-lifting, though, I’m counting and not fighting the certain despair that I’ll never catch my breath again.

Today though, Air Force Guy had the TV up really loud with awful news about Libya. Since I have a strict policy about not depressing myself with news about events I can’t affect, I jumped up from the adductor machine and grabbed the headphones.

Since I was mid-count, rather than searching out my weights playlist (why do I have one if I never use it? Hmm) I just clicked play. This one song that my long-time friend, Kev, sent me came on.

Because I could, I played that one song over and over. I love to do this. I can listen to the same song probably 50 times in a row. Something, I’ve discovered, the people around me don’t enjoy so much.

Its an emotional song that strikes me on many levels. As some songs do, this one makes me want to write a story about it. I’ve never actually written a story from a song, but I think I might this time. As I kept clicking the back button to hear it just one more time (there’s a way to put it on repeat, right? one day I should learn to maximize my iPod use), the story played out in my head, snippets of conversation. I could see the opening line, the penultimate scene.

It could be a great book.

Yesterday, I worked on two projects. If you follow this blog, you’ll know I’ve been musing over whether I can move two writing projects forward at the same time. I’m a monogamous gal by nature, mainly because I’m simply not inclined to cheat. The thing I’m in love with is fine by me. It occurs to me now that this is the same aspect of my character that likes to listen to the same song over and over and over. Apple pie for the rest of my life? Sure! Still, with writing, I’d like to get more going.

So, yesterday, I clocked off the Internet for my usual two hours. (Yes, I’m weak and cannot stop myself from clicking if it’s there to be clicked.) I wrote my 1K on the new novel, The Middle Princess. For the remaining 45 minutes, I worked on Sapphire revisions, from the editorial notes that came in this weekend.

Normally I’m not allowed to deviate from a current project, but since that experiment worked, I might try writing up a little of this morning’s story – just enough to keep it alive and kicking.