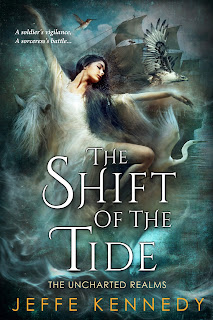 I’m over at Jill Archer’s blog today, where we’re having a great conversation on whether Fantasy has become an awards category for anything vaguely “woo woo.” Check out the discussion here! I’m over at the SFF7 this morning, mulling this week’s topic: How does working within or outside the genre spectrum benefit or limit? Spring definitely begins in March here in Santa Fe. I spent a few hours sitting outside reading with my coffee in the sunshine this morning. Lovely!

This week at Word Whores, we’re discussing our favorite genre tropes. Since we get to pick the genre and I write in three at the moment, I’m talking about one from each. Also, since I’m the topic-kickoff girl, I’ll take on the job of defining “Trope,” for those who aren’t familiar. Today at the Fantasy, Futuristic and Paranormal blog, I’m talking about my upcoming release, UNDER HIS TOUCH, and why I incorporated elements of the Dream King from Neil Gaiman’s Sandman. I haven’t done many sunset pictures lately. Wouldn’t want you all to pine away for lack of them!

And you can focus on the pretty clouds and take deep, calming breaths while I explain why everyone is saying Paranormal Romance and Urban Fantasy are dead genres.

I’ve participated in this very conversation several times over the last few weeks – in meetings, panels and online – so I thought I might as well write out my take on it, as something to point to.

But yes, this is the industry message we’ve been hearing and was probably one of the key takeaway messages from RWA 2014. Agents and Editors are just not buying new Paranormal and Urban Fantasy stories.

But, but, but… Jeffe! I hear you all saying. But your Twelve Kingdoms books are doing really great and you said the other day that if presales on The Tears of the Rose are good enough you’ll get to do three more!

But I see new paranormal and urban fantasy books coming out all the time!

But I love to read those genres and know *tons* of other people do too, how can it be dead??

What do they even mean when they say a genre is dead?

Okay, so here are some simple answers for you.

You’re right – it’s a misnomer. Even the agent who declares on a panel that PNR is dead will agree ten minutes later that genres don’t really die. She means that it’s on a downcycle. When industry people say this, they mean that agents can’t sell that genre to a big publishing house and editors can’t justify acquiring it. Will that change eventually? Of course. Will certain books circumvent that rule? Of course. Will yours? The odds are not in your favor.

If editors say they won’t acquire, then why did [insert famous PNR/UF author name here] get another big deal?

Because they *already have an audience.* It’s not a gamble to buy more books from an established author. It is a gamble to give a book contract to a new or midlist author. Having that uncertainty on top of a downcycle genre stacks the deck against the decision to go for it. This is why the big authors get big deals, to keep doing what they’ve been doing. This is why umpteen books still come out on the shelves. This is also why digital and smaller publishers are more likely to give a book in a downcycle genre more of a chance, because they have less investment to gamble.

Okay, there are a few things to consider here. One is that these people see the sales and you don’t. Just because the big authors (see above) are selling lots of books, does not mean that all books in the genre are doing likewise. I can vouch that a number of authors I know writing in these genres are not selling that phenomenally. There are a LOT of books out there – the market is glutted, which is what causes a downcycle. It’s hard for a new author to break in, be different, catch reader attention. One thing to consider is, between you and your PNR/UF loving friends, how many of the books that you’ve bought lately were from totally new authors? Not new-to-you, but debuts? If can list some, think about why those debut authors caught your attention.

So… does this mean you’re screwed?

First of all, remember than genre is something of an artificial construct. If you can find a way to spin your story or the description to make it clear that it’s not yet another example of this dead genre, do that. Some of you cleverly pointed at my books and that I, as NOT a big author, am doing okay getting them out there. That’s because they’re Fantasy. If you were paying attention last week, female authors did great in the Hugo Awards. Keep in mind that the SciFi/Fantasy (SFF) publishers are not the same as the PNR publishers. Other romance subgenres may be hotter now, but there’s hunger for female voices and stories in SFF.

And besides, the wheel goes round, right?

I’m giving you perspective and advice on the market right now. That’s totally different than the advice I’d give you as a writer, which is to write what you love. As an artist, as a storyteller, you have to follow your heart. Now, if your heart is polyamorous and can be just as happy with you writing an idea in an upcycle genre? Do that. But don’t chase the market. Put the book in a drawer and wait for a better season. I have one that’s a great book, could be an amazing series – and the market is all wrong right now.

That’s what writers do.