This is the post I was going to write last Friday.

And then I just couldn’t.

Even, now, a week later, I’m tearing up as I write.

See, last Thursday, our old dog, Zip, died. He was almost 15 – old for a border collie – so we were expecting it. Braced for it anyway. You know how it is. For the last couple of years he’d been getting skinnier and more unstable. Two years ago we bought a ramp for him to walk up to get in the back of the Jeep. Not that he liked to use it. He’d always try to jump in and out anyway – which his joints just couldn’t take.

His two favorite things in the world were riding in the Jeep and going for a walk. Keeping him from crippling up so he could continue to do those things required more and more elaborate efforts on our part. He never quite understood that his body didn’t work as well as it used to – a blissful ignorance.

Zip was a beta dog. Or gamma. So far from being alpha, that we often shook our heads at his sheepishness. The cats bossed him around. He lived the first part of his life with our very alpha female border collie, who pretty much oppressed him. After she died, he  changed so dramatically, gaining weight and spirit, that David decided Zip deserved to be an only dog from there on out. It was a good choice. David was the sun and center of Zip’s universe. That dog loved being near David and being his constant partner.

So, though we’d been braced for it, the actual event took us by surprise.

He’d had his usual walk the night before, had been doing his usual things that morning. David came into my office and said Zip was acting foggy and would I give him a B-12 injection. We’d been giving him weekly B-12 boosts for the last several months and it had really helped. I did and went back to writing.

David came in again and said “I think he’s dying.”

Zip was lying belly-down on the floor, weaving his head around like he couldn’t see. He liked us petting him though. We sat beside him and he turned onto his side, breathing getting erratic and legs stretching. His tongue lolled out, which made us think it was a stroke. We briefly discussed taking him to the vet, but decided against it. We doubted the vet could do much and it seemed to be moving fast.

Indeed, within a few minutes, Zip sighed his last breath and was gone.

It was a lovely warm day, so we cleaned him up, took him outside and buried him. There seemed to be no reason to delay. Still, from him clicking around the house to being buried in two hours was kind of wrenching for us. I canceled weekend travel plans and we spent Valentines Day in mourning.

We’re doing better now, learning not to listen for him. David has been going on the evening walk without him, which never fails to trip my heart.

And, though, we’d said that, once Zip died we wouldn’t get another dog, David is changing his mind. He’s been talking about a puppy.

I’m good with that.

Have I ever mentioned that our dog, Zip, is pretty much completely deaf? Yeah… He’s an older dog now and it happens. Most of the time it’s not that big a deal. He’s a border collie, so he responds well to hand signals. And he’s generally pretty well behaved. Because he can’t hear, he’s less sensitive to being disturbed by outside noises. So, no more pacing at night or running to the window to see who’s going by.

He dreams like a son-of-a-gun. Couple this with no sense of his own sound-production….

That’s right. 4am he had a bark-attack. Full volume, right next to the bed.

I sat up bolt upright. The kitties went sailing. You know how in stories people say they feel like their hearts might burst? Yeah, that. Nothing like a huge adrenaline kick yanking you out of a deep sleep in the early morning.

I could swear I have an epinephrine hangover today. 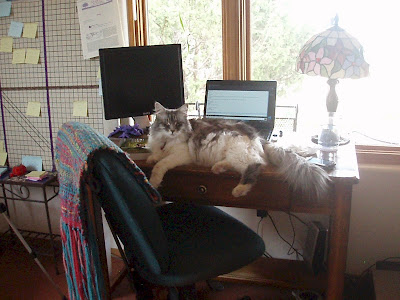 I’m over at Word-Whores today, introducing the Fur Family.