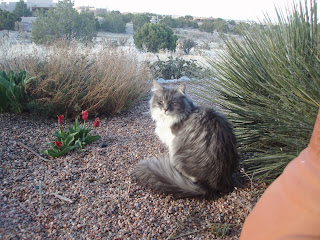 January in Wyoming is for wind. In point of fact, every season here is for wind. I have a Wyoming Wind Festival shirt showing the dates January 1 – December 31.

But it’s worse in January. Maybe because January is so dark and bleak anyway. Little fresh snow, the old ices over, turning grayer and browner as the wind howls over it. Much of our snow here actually sublimates — that’s when a solid skips the liquid phase and goes straight to the third phase of existence, gas. Our snow goes from condensed ice, skips being water and evaporates into the dry air. Sweeping away and leaving us dry, cold and windblown.

You wake to the train-roar of it in the morning, listen to it howl around the chimney in the evening. And on the weather they remind you “high wind warning.” Thanks for the update. But the tractor-trailer rigs upended on the interstate remind us that not everyone respects the wind. The snow-mobile trailer dumped on its side, the contents scattered and abandoned, bear testament. Advise no light trailers. Motorists planning to travel along Interstate 80 between Rawlins and the Summit driving lightweight or high profile vehicles may want to delay travel until later in the week.

See? they tell us. The wind won’t always blow like this.

What’s funny is, when the wind blows really hard like this, our electronic doorbell rings. Don’t ask me why — it’s a mystery of electronics and physics. Static charge? Ions building up? I have no idea. But as I wrote this, the doorbell rang, so I went to disconnect it. Once it starts, it’ll repeat indefinitely. But there was a young woman at the door — very unusual in general, let alone this early in the morning.

She carried a baby in a sling against her breast and a bag of phone books, the wind howling at her back. She asked if this was the site of the company I work for, which it is. My home office is our Wyoming branch. She took my name in exchange for the phone book and declined stepping into the vestibule to note it down.

“Not a very nice day to be doing this,” I said to her. The baby’s dark eyes watched me in solemn wonder. Tucked up against her mother’s breast, under a partially zipped parka, the wind wasn’t tugging at her at all.

“It’s not so bad!” the mother replied cheerfully. And she bounced down the steps, the wind tugging her hair with wild glee.