This is David happily using his new super-duper weed-whacker.

See, we had a weed-whacker that we brought with us from Wyoming, but it was meant for stuff like, well, grass. Soft stuff. Not desert stuff. Desert stuff is all impenetrable woody stems and thorny exteriors. The plants guard their precious water stores by making it exceedingly difficult for anything to munch them. Turns out this also goes for being chopped down.

Now, I am not the one who thought the chopping needed to happen. I think this is one of those male/female things. Just as he doesn’t notice his bank statements sitting on the counter for weeks on end, I don’t look out over our property and say “Curses! Look at those bushes. It offends my eye to see them!”

(Okay, he might not have used that exact phrasing, but he did say that it bugged him to see it. He said this in a way that invited me to agree that I could barely sit on the patio for the irritation of seeing all those bushes just growing out there.)

He pulled out the trump card, though, by pointing out predators could use the overgrowth for easy cover to stalk the kitties.

I agreed something needed to be done and he happily settled in to research the ideal chopper-downer tool. Boy, did he find some. Did you know you can easily spend $2K on a big bushwhacker? Finally he picked out a bushwhacking lawnmower that was “only” $329. I balked. He mentioned predators again. I whined about the expense for something we use once a year. He agreed to look at attachments for the weed-whacker.

Finally we went to Home Depot and perused the weed-whacking options. We found the ideal solution in this kind of cool Ryobi Brush Cutter. (You may not care that much, but for those who like to ogle power tools, and you know who you are, there it is.) It’s nice because it has a manly big blade that cuts through woody interlopers like butter. And you can get other attachments for it, which pleases me, for the next time we discover there’s some power tool missing from our lives, leaving a big black hole of aching despair.

He spend the rest of the long weekend happily trimming down the ugly shrubs and dead cholla.

It does look much better now. 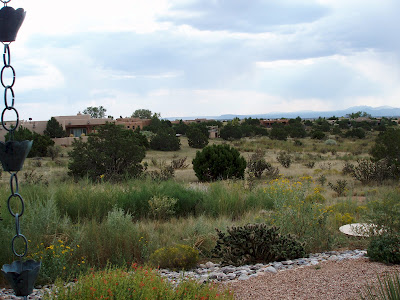