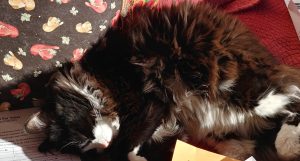 As I was preparing to write this post, the US Supreme Court just ruled that no state can ban same-sex marriage. This effectively legalizes gay marriage in the United States.

Much excitement and rejoicing!

I’m happy for my gay friends. More, I’m happy to see the recognition of one of my fundamental beliefs: that people should be able to love and have sex in any way that makes them happy. As long as everyone is consenting, it’s nobody else’s business what people do together.

It really kind of baffles me that anyone wants to pass judgment this way.

But then, I’m not much for judgment of any kind.

So, that happened today. Some of the Supreme Court commentary that people are sharing regarding the decision is really interesting, particularly Ruth Bader Ginsberg’s musings on marriage evolving away from the concept of women as property. I also read this article, musing about gender and all the traits we associate with being male or female – both in body and mind.

And then I’d been thinking about this one review of THE TALON OF THE HAWK. I know, I know – I’m not supposed to read the reviews! In this case, however, the reviewer tagged me on social media with the review. In more than one venue. It wasn’t an amazing review, but not terrible either. Still she complained quite strongly about something that my heroine, Ursula, does near the end. I know it’s something that frustrated a number of readers – including one of my critique partners – and I did consider taking it out or changing it. In the final cut, however, it was something that I believed Ursula absolutely *would* do. It’s part of her final character change that, despite how far she’s come, she still reverts to a particular emotional habit. Yes, it’s annoying and frustrating and she’s absolutely in the wrong.

But she has to figure that out before she can really evolve as a person. To become somebody other than where she’s been heading all her life.

I get, therefor, why this reviewer was angry at Ursula for doing it – or at me for writing it – but what bothered me, and has stuck in my head, is that she referred to it as “stupid female drama.”

This seems so terribly misogynistic to me. Yes, Ursula makes the mistake of refusing to hear her lover out. She leaps to an assumption based on her own emotional issues. But why is that exclusively the territory of females? Don’t all people, regardless of their physical or mental gender, sometimes fail to listen to the people close to them? Most every major fight I’ve had with my husband had to do with one or both of us miscommunicating in some way. A lot of the time it was because we had so much emotion tied up in whatever it was that we didn’t think clearly. I think it’s fair to say that he can be worse about it than I am – and I say this with the perspective of nearly 25 years together – because I tend to be more cerebral and he’s more emotional. This has nothing to do with him being male and me being female. It has whole lot more to do with me being an INTJ and him being an INFP.

Personality has no gender, is how I see it. Nor do the emotional issues we all strive to overcome so we can be happy and fulfilled.

So, sure. There’s stupid drama and it’s Ursula’s fault, but that’s the only way that it’s female. Just as we in the U.S. can now dispense with the terms “same-sex marriage” or “gay marriage” and just call it what it is: marriage.