No, this really isn’t about George Michael’s Freedom 90 anthem. That’s just the earworm that springs to mind when I think about Freedom.

That and “the Iraqi people don’t love freedom,” but that one irritates me.

I started using a program this week called Freedom. You can get it for Windows or Macs for $10. Basically it shuts down your internet access for as long as you designate – from 30 minutes to 8 hours. If you *have* to get to the internet, you can reboot.

I read my emails, do my blog post, send the notice out on the social media waters, then shut everything down to write. That works.

Until I pause to think. I get these impulses, not unlike the emotional eating ones I’ve talked about with fasting, where I think, oh, I’ll just see if anyone commented on my blog.

Or replied to my tweets.

Or sent me an email.

Turns out, I really did need this.

I’ve even extended the time now, which is funny to me. The window pops up saying I’ve completed my session and do I want to quit or extend. Twice I’ve extended. As soon as I quit, the email icon pops up and I can’t not look. I extend and it’s like keeping the door shut.

I’m Jeffe and I’m a webaholic.

Thank goodness I was granted the wisdom to get Freedom. Offline I go! 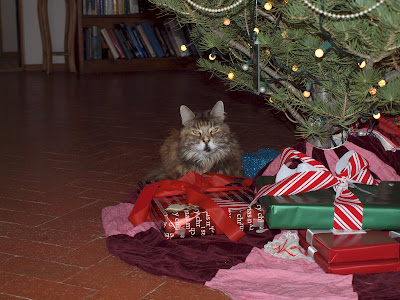 We’re closing in on the final stretch of Christmas here. Presents have been acquired and wrapped. Today we’ll ship the final lot – and just to Front Range folks, so don’t panic. The big party went swimmingly Saturday night.

Both kitties love to hang out under the Christmas tree. And maybe chew on the ribbons a little bit. They consider themselves a gift to us.

So, today is the last fast day before the major feast. When I posted about our weekly fasts back in October, in the comments conversation that followed, I promised to report back in another eight weeks. I’m a bit past that now, but it’s been a busy blogging time.

I look forward to the fast days at this point. It sounds bizarre, most likely, but the break is such a welcome resetting of my system that I get excited for how good I’ll feel. For example, the treat onslaught has started. Last Wednesday the first food package arrived. I’ve had peppermint brownies and homemade candies. I made sugar cookies.

(They turned out so pretty I have to immortalize them here.) 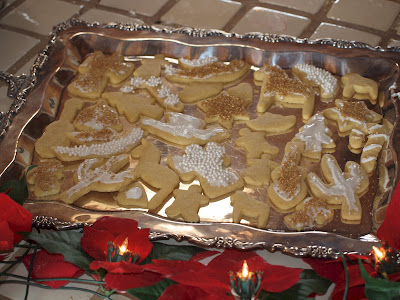 Saturday night I drank champagne and nibbled on all sorts of lovely things. David and I woke up early Sunday starving and went out to breakfast. Country ham with a biscuit and gravy was just the thing for my mild hangover. We ended up eating lunch out, too, since we were in town shopping. Margaritas, live music and prime rib sandwich made it very fun.

Now I know I’m entering the uber-party. We’re meeting friends for drinks and dinner tomorrow night. Then pre-Christmas Eve dinner out at a lovely restaurant, Christmas Eve dinner, Christmas Day dinner and Boxing Day tea. It will all be wonderful and I intend to completely indulge. Then next Monday, we’ll fast again. Cleanse our systems and return to baseline.

It’s interesting to me how many religions and philosophies incorporate an element of fasting. And usually the fasting precedes the feast. For some it’s a sacrifice in honor of ancestors who suffered. Sometimes it’s meant to be a deliberate discomfort, to remind you to think about philosophical questions. It can also be a symbolic preparation for the feast. Part of what makes a feast such a joy is the contrast to starvation and suffering.

So I’m fasting today. I’ll take some time to reflect on how full and rich my life is. 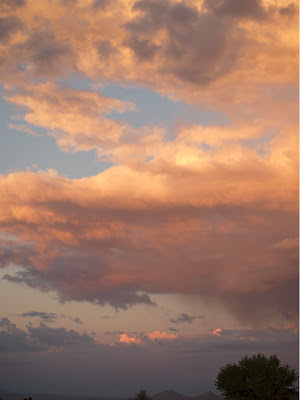 David and I have started fasting once a week, just for 24 hours.

No – it’s not a religious thing, which is the first question another friend asked me in horror. It’s a health thing.

It’s interesting: we have this built-in cultural fear of going without food. The first question most people ask is if that’s healthy. Between our ancestral, and very real fear, of starving and our modern cultural icons of body-image psychosis that leads to anorexia, the idea of not eating is frightening to us.

But yes, it is healthy. A 24-hour fast once a week cleanses the digestive system and stimulates the immune system. It’s a good practice for warding off chronic disease, especially now that we’re middle-aged. We simply stop eating after dinner on Sunday night, then drink only water until Monday evening, when we break fast with a salad of red cabbage, beets and carrots.

The best part is how good I feel the next day. The process leaves me feeling vital and energized.

The most interesting part though, is the food fantasies.

I’ll be working away and suddenly a daydream will seize me. I’ll want a cupcake, more than anything in the world. Or my mouth will suddenly flood with the taste of a baked potato oozing with butter. I’ll think I want food I never eat, or haven’t eaten in years. Sometimes, my brain will try to trick me, but inserting a random thought that I should just pop into the kitchen and grab a cookie. It’s not even being hungry so much as having little temper-tantrums of wanting.

For the first time in my life, I really understand now what emotional-eating is about.

It’s become almost a cliche now. “I ate my emotions” Reese Witherspoon says in defense of her teenage fat in Four Christmases – and it’s a funny line. (Yeah, I know I’m the only person who liked that movie. I laughed and laughed.) But it’s a truism, that much of our eating choices are driven by emotion, not nutrition. We eat to soothe ourselves, to ease the pain of whatever hurts us, to add to the happy.

I’m not saying that’s wrong either. I’m the first one to enjoy that chilled glass of wine. I’ll absolutely gorge on brownies with you to salve the pain of a rejection. Is spaghetti with meatballs one of my favorite comfort foods? Oh yes, yes, yes.

But I think it’s useful to know that. It’s good for me to know that I’m eating my big plate of pasta because it makes me happy, not because my body needs that kind of nutrition.

The other thing fasting does is break the habit of nibbling.

Once I overrule that little pop-up window in my brain that suggest grabbing a cookie, some nuts, a handful of chips, after a while that subroutine stops running. Eating becomes a deliberate choice rather than a habit. Since I work from home, with easy access to a kitchen full of enticing food, I’m pleased to break that particular habit.