I love to have an all-white bed in the summertime. The layers of whites create a crisp cool feeling.

It used to be, back in Wyoming, that I’d retire the white sheets after Labor Day, along with my white sundresses and white shoes. I know some people get annoyed with that “rule,” saying it’s arbitrary and silly. But I like the ritual of it. Observing the changing of the seasons.

In Wyoming, though, we could get a frost, or even a bit of snow this weekend. (I see our old hometown got down to 40 F last night.) Here, we still have a lot of warm weather still.

So, I’m enjoying the day off, finishing some outside painting and chores. 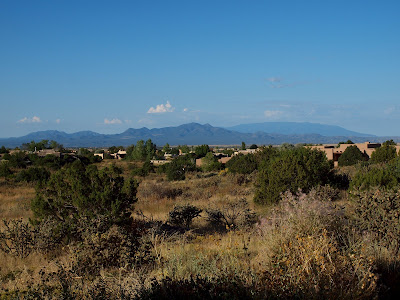 If you’ve used Blogger.com, then you know that they offer you a template and examples on the create post screen. It’s an easy set-up to learn, which is always a good thing. I had enough anxiety about starting a blog without wading through techno-angst as well.

What’s funny is, at the bottom there’s a blank where you can fill in “Labels for this post.” And then they offer “e.g. scooter, vacation, fall.” Every day, when I fill in my labels, I look at “scooter, vacation, fall” and think about using them. I’ve considered starting some kind of special Blogspot Commemoration Day, where we all blog about scooters, vacation and fall. Probably I’m the only one entertained by the idea.

Last Fall we went on vacation to Italy, and we all rented scooters. It was really fun.

We went on vacation to Italy and were having a great time on our rented scooters until my mom took a bad fall.

The preponderance of “Scooters” in the Bush administration made us all want to go on vacation, until last Fall when Obama was elected and we felt much better about everything.

Okay, it’s out of my system now.