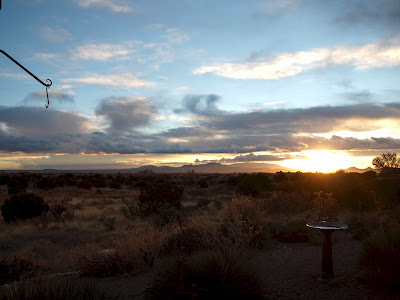 Overheard from the Crazy Gym Lady: “That wasn’t sugar. It was honey. Honey isn’t sugar.”

This morning, the Jeep was completely frosted over. A heavy fog had settled in overnight – indeed a wind-driven fog bank was still whipping by overhead, foaming and turbulent like those old paintings of horses boiling out of the surf – and froze onto every surface in a thick coat.

David turned on the defroster, to the second-highest setting, then got out to scrape off the windshield. Once he was out of the car, I turned the defroster up to its highest setting. He won’t do this. Something prevents him from using the “high” setting on anything. Even boiling water in the tea-kettle, he’ll put it on just a notch down from high. Or, much more aggravating, he’ll put it on somewhere around the low side of medium.

Not particularly wanting to wait half an hour for the water to heat, I’ll sneak into the kitchen and turn it up to High.

“So the water will boil,” I tell him in my soul-of-patience voice.

“You just like to superheat everything,” he tells me.

He tells me that a lot. I like to put the take-out pizza in the oven to keep warm while we eat the initial slices. Yes – “superheating.” I bring pasta water to a rolling boil. I like baths hot, not tepid.

Oh yes, it’s a problem sometimes. I’m impatient, so I nearly always start a skillet or pan on my favorite setting, start the oil, maybe the garlic, and dial down from there. Sometimes I might, um, get distracted, too. I really do try not to let this happen often. The getting distracted part. I’m still quite fond of High.

That’s the intensity in me. The drama. I like things bold and decisive. Dithering drives me up the wall. While David rarely dithers, he’s for the careful approach. He likes to ease into something, take it slowly. Wait and see.

We’re fire and water. It actually works for us.

Though I’m forever turning the dials up, he’s there turning them down. He hesitates to take action, but I’ve already bought the tickets. When I’m running too hot, he tells me to settle down.

Are we attracted opposites? I think it’s more the balance.

Honey isn’t sugar. Except it is.