We had some coyote visitors the other day. I took this through our glass front door. They look happy and healthy!

I’m over at Word Whores today, as I am every Sunday, giving the five things I do to boost my creativity. 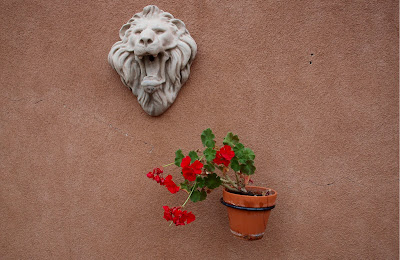 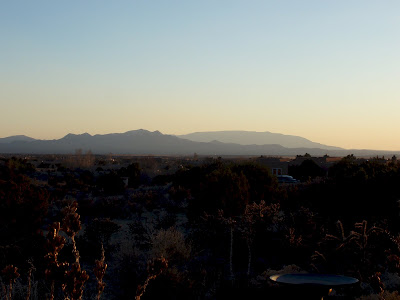 I love it when the ridges look like this, all two-dimensional, like stage props to hint at landscape.

I remember coming down to Santa Fe with my folks when I was a kid — right around this time of year, too. We’d often come down for Spring Break, sometimes staying, sometimes continuing farther south. I loved this look then, too. I’m pretty sure I even wrote an abysmal poem at some point about cardboard mountains propped against the western sky. It undoubtedly included something about my state of angst and wretched loneliness, which was, naturally, nonexistent.

But if there’s angst to be found, an adolescent girl will dig it out.

Last evening I gazed at this view and thought how amazing that I get to see this every day now. Instead of wretched loneliness, I felt a rush of overwhelming gratitude. I took a moment to offer my thanks for all the blessings.

One of my favorite professors from college, David Hadas, who described himself as a non-practicing Orthodox Jew, had a favorite saying. It might have been from Martin Buber. He said that when terrible things happen to us, we raise our eyes to the sky and say why? Why me? But when wonderful things happen, we never ask “why me?”

Perhaps we are like favored children that way – we never question that we are loved, that we have a beautiful world to enjoy, that we have plenty. We might be just slightly spoilt that we throw tantrums when we don’t get what we want, exactly the way we want it. But we mature and grow wiser, realizing that the bad comes with the good. How we decide to handle that defines who we become.

It’s something for me to remember, that I’m incredibly lucky to have so many blessings in my life. Wanting more means that I’m alive and growing. In the meantime, I get to enjoy what I have.