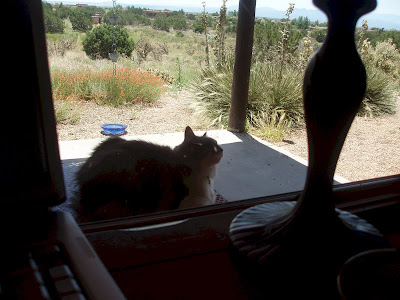 No, I didn’t take that picture. I wish!

I pulled it from here and I’m hoping no one will mind. Once I snap a picture of our own little house wren, I’ll swap it out.

He or she – apparently the males and females look much the same – has been busily building a nest inside the cow skull hanging outside our front door. She goes in the top, (we’ll just decide it’s a she), through the cannula where the spinal cord would exit and has stuff the brain cavity with hair, grass and bits of floss pulled from the seams of the patio chair cushions.

At first I thought this was a bad idea. Disaster waiting to happen. But it turns out she knows what she’s doing. House wrens will steal other birds’ nests. She’s tiny, but she’s aggressive. She doesn’t mind us coming and going and she tells Isabel off if she gets too close.

I like a bird who takes care of herself.

I thought it was funny.

But no. She didn’t even bite. So I mentioned it to Allison, who didn’t get why I thought it was funny, either. Now I know why. That’s exactly what the editing process was like. Was it one breast or both, which means it should be plural. If he’s busy with the one hand then he’s only holding one shoulder so he can’t release her shoulders. I swear – even UNM Press and Redbook didn’t line edit this exhaustively.

Or maybe that’s the beauty of getting galley proofs instead of a document marked with track changes. I miss my blissful ignorance.

Amusingly, many of the commas my content editor inserted, the copy editor removed. Comma placement comes down to a matter of opinion most of the time. Some people have very strong opinions on the topic. Me? Not so much.

At any rate, there I am, working my little tasks while the wren works outside my window. Bit by bit, adding to our creations.