This weekend, my local RWA chapter, LERA, had our biannual conference. Two of our guests were Jennifer Enderlin, editor for the fabulous Darynda Jones at St. Martins, and NYT Bestselling author Deanna Raybourn. On Friday, Darynda and our two conference organizers, Tammy Baumann and Kari Bovee, made the trip up to Santa Fe. We did lunch and shopping and I got to play tour guide. Such a fun day for me!

You can read more about it, and about what the most difficult part of the story is for me, over at Word Whores today. I’m nearly done with Platinum, my follow-up to Sapphire.

In many ways, this has been a more difficult story to write than Sapphire was. All these years, I’ve heard writers talk about how each new book is a different challenge, some easy, some harder. I suppose that has something to do with art, with the creative process. If it’s not different every time, then we’re likely not growing and challenging ourselves.

And each world, each set of characters brings their own unique set of problems to the mix. It’s as if I’m their therapist. They walk into my office, dump their issues on my desk and stand back, waiting for me to sort it out for them. No one’s path is the same.

A writer friend recently told me she can knock out a novella in two to three weeks. I admit I felt a surge of envy at the remark. Theoretically, I could, too. A novella is around 26,000 to 40,000 words. At 1,500 words per day, you could hit 31,500 words in three weeks. Totally doable. And, when I started Platinum on February 1, I thought I would have it done in a month. I was totally on track to do that, when I inexplicably slowed to a crawl around the end of the third act. I figure this novella will come out around 34,000 words, and I hit a snag around 26K.

Not writer’s block – I was still writing. But the scene wasn’t right. I wrote past it and circled back. Something was wrong. Something missing or not following the correct path. My characters refused to march politely to their happily-ever-after, even though I know how they get there. I had to sneak around them, change the interactions, find exactly what needed to happen so they can see their way past the thorny problems.

What’s funny is, this happened with The Middle Princess, too. And not with any stories I’ve written before this. So I don’t know if this is my new thing or what. Regardless, it’s clear that I need to add extra time onto the end of my estimates, for the big ending slow-down.

Now I know why therapists like to just give their patients Lithium  and call it good.

Would be so much easier. 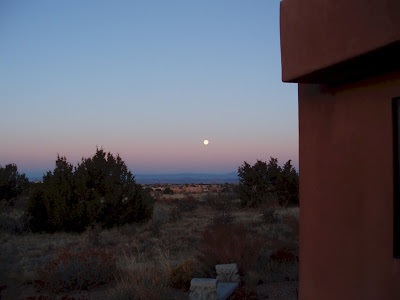 The moon has been so bright the last few nights that it shines in our west-facing bedroom like a spotlight.

Every night, the moon rises one hour later. So the time the moon shines in our window has gotten progressively later. The last few nights, we’ve awakened when the moon hit the window at just after midnight, then 1:30 and so on. Last night I woke up at 3:45 and got up to pee, which is fairly usual for me. When I came back to bed, David was sitting on the side of the bed, which is very unusual. He gave me a bright-eyed look and said “time to get up?”

Um no, I told him. I realized the room was so bright from the moon it could look like sunrise. It’s not even four o’clock yet.

Oh good, he says, lays down and promptly goes back to sleep. If he was ever really awake at all.

I was awake for a while, watching the mooon shine in. I inherited the family gene for fretting in the middle of the night. Fortunately I don’t do it often, or for very long.

Having the moon there comforted me.

When we got up to the alarm call at six, the moon still hung there, just setting as the sun rose.

Soon it was gone and the day belonged entirely to the sun.