The lovely Lynda Ryba of the Fish with Sticks review blog interviewed me and some other wonderful authors about Banned Books Week. The post is over on the Wicked Little Pixie blog, so go check it out! 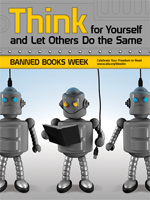 I waited until today to do my own tribute to Banned Books Week.

Seemed right to me, to let everyone have their say and make their plugs. Not that I don’t care, but maybe because I care so much.

I’m a believer in reading. In asking questions. I believe there’s nothing you can read or encounter that will taint or stain anyone beyond repair. We are elastic beings. More, we deserve the opportunity to decide for ourselves what ideas to keep and which to reject.

That’s the foundation of Free Will.

I remember finding out that there were periods in human history when people were to read only the Bible and nothing else. To keep their thoughts pure. As if people aren’t capable of culling the garbage for themselves. One man’s garbage is another man’s treasure.

You don’t get to decide for me.

So, in honor of Banned Books Week, I’ll take on the red-headed stepchild on the list of the Top Ten Most Frequently Challenged Books of 2009: Twilight.

Yeah, I know. Twilight?? The megaseller everyone seems to love to hate? But yes. The series is Number Five on the list for: Sexually Explicit, Religious Viewpoint, Unsuited to Age Group.

I first learned about Twilight when my friend RoseMarie London sent me a note from an editor-friend in New York City. The friend said she’d spent the weekend under the spell of this new book and how could she be so in love with a completely chaste hero? Knowing I was interested in such things, RM sent me the email and said maybe I should read it.

It’s easy to hurl stones at the massively successful. To find the cracks and pick fun at the giants. But I can vouch that, before it was THE THING, Twilight seduced me. Creating sexual tension where there is no actual sex is no mean feat. And if anyone thinks that being a teenager isn’t just like that, well then… no one can help you.

More, I know a teenage brother and sister. The older sister is a bookworm, the younger brother a budding jock and social butterfly. They both stayed in all weekend to read the newest installment on the Twilight series. Only the boy asked his mother to lie to his friends that called and say he was doing chores.

He didn’t want them to know what he was really doing.

Any book, or series of books, so compelling as to make a social teenager duck the peer pressure of his friends is a book that prevents more robots.

Fight the good fight. Buy a banned or challenged book.

Our children will thank you for what you gave them, not what you kept them from.

This is banned books week, for any of you who’ve been under a rock.
Hey — even *I* know about it, so you have no excuse! In honor of the event, I picked a banned book from the recent list that happened to be one of my all-time favorite books, ever, to enjoy a little sunshine here. And yes, I read it in high school. (Of course, I also read The Joy of Sex in 6th grade, so I’m not a good case-study.)
Author Jeri Smith-Ready sent ’round this interesting link that shows a map of book challenges. She commented that she found it surprising. I’m betting that she’s surprised there are so many challenges in the liberal East and so few in the conservative West.
I think there are two things going on here:
1) Teachers and librarians in the conservative West are much less likely to rock the boat by choosing questionable books in the first place.
2) The general population are less likely to be busybodies and get in anyone else’s face about what they are reading.
I recall a conversation I had in the wake of Matthew Shepherd’s murder. My friend, a writer, had relocated to Laramie from Boston. She thought the town guilty of allowing the hate crime because Westerners don’t confront issues in the open.
“My landlord,” she told me, “sees me bring women over. I know he can see me bring women over and never once has he said anything to me about me being a lesbian.”
I told her I thought this was a common courtesy thing. You live your life and I’ll live mine.
This is how I feel about books. Leave people be. Even young people. I truly believe that no one was ever harmed by reading. Our minds are meant to take in and filter information and it’s up to each of us to do that for ourselves. Any time we take the step of filtering for someone else, we’re depriving them of some of their humanity.
Not to be confrontational about it.