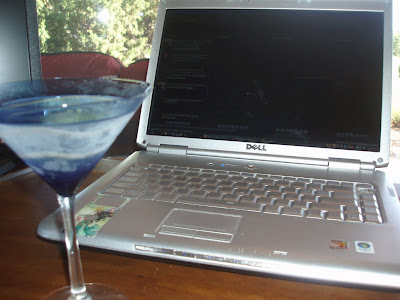 Yesterday was a fun day. Release day is kind of like a birthday, where everyone is nice to you all day long.

Here’s my celebratory martini at the end of the day with my Twitter pals.

I toasted, then took it out on the patio to enjoy. It was a warm evening. Hot, in fact. Like mid-90s hot.

I know to most of you in the East and South, that’s not so bad. But for us at 6,300 feet, it’s unusually warm. After the sun set, we watched Daybreakers and by bed time it was still 85 in the house and I realized I didn’t feel good, I had been so warm for so long. So we did something we’ve never done before.

We turned on the air conditioning.

I know, I know – this is not a big deal for 99% of you out there. But David and I both grew up in the West, at fairly high altitudes, where air conditioning is not that necessary. In fact, none of the previous three homes we’ve shared even had air conditioning.

Plus, I generally don’t like air conditioning. I like fresh air, natural breezes and bird song. I don’t like cold air blowing on me so much. I resist having the ceiling fans on, even, for that reason.

So, we turned on the air conditioning and closed the windows. Let me tell you: that cool air filling the house was a sweet benediction. We’re lucky to have an energy/space efficient house, so the cooling was palpable. I immediately felt tons better, which just confirmed that I’d really gotten overheated.

I know air conditioning is a luxury. People lived for thousands of years without it, but they also got sick and died young. I know people bemoan the loss of the evening porch society, when everyone sat outside to cool in the evenings. Now they’re sealed inside, with their tvs and their interwebs.

But is sure is nice to have when you want it!