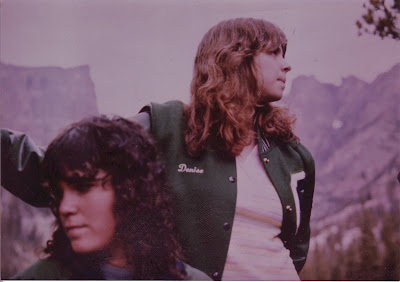 I posted this photo to Facebook back in August, but a high school friend just commented on it and reminded me. This is Lisa and Denise, two of my best friends in high school. We were on a geology field trip in the mountains on a drizzly day. And, no, I have no idea why they look so dramatic and pensive.

Makes for a cool picture, though.

This has kind of been high school nostalgia week, anyway, what with celebrating Kev’s birthday and some odd 30 years of knowing each other. I know it’s old news to lots of people, but I think my cohort is just now realizing that we’re hitting our middle years. We don’t feel old, but it’s hard to deny those mid-40s numbers.

Interestingly, I don’t see a lot of us racing out to buy sports cars or cougar on nubile young people. I like to think it’s because we are so much wiser than our parents.

Also, those nubile young people? They don’t know Mikhail Barishnykov was a ballet dancer before he was on Sex and the City. And they don’t understand when you try to explain that he claimed political asylum. I’m sorry: you can’t base even meaningless sex on that.

Anyway, I mentioned yesterday that my high school years were largely spent babysitting. This was partly on my mind due to teen nostalgia, but also because of a blog post a friend put up last week about leaving her kid with a babysitter for the first time. She asked people how much they checked in, etc.

And it reminded me of this one babysitting disaster.

As, I mentioned yesterday, I babysat A LOT. I had a great reputation and new people often called me who’d been referred by other people. Well, this mom called me. She lived in the next subdivision over, had *just* moved in and had been invited to a neighborhood party. I’d been recommended by a neighbor and could I sit their three kids?

Easy peasy job. Older boy, younger girl and a toddler. Boxes everywhere. But mom was organized. She had the list of emergency numbers, including the party. (For you nubile young people, this was before cell phones. Yes, indeed. Sit wide-eyed at my knee and listen.) She gave me a list of allergies and rules and bed times. The kids were charming. Everything seemed just fine.

All went smoothly. We ate some dinner. We played games. Bedtime went with stories and without protest.

Until the middle girl started puking.

Lots of puking. And diarrhea.

She was sick all over her bed, so we had to clean her up, change her sheets and put on fresh jammies. Then the toddler got sick. Big bro was helping me and I’d had sick kids before, but this wasn’t looking good.

Now, I pretty much never called parents. I figured they’d were out for a fun evening and, really, very little ever occurred that couldn’t wait for them to deal with. I’d called a couple of times to ask questions or verify something, but never had I called parents to come home.

But I couldn’t find more fresh sheets, so I called the parents.

As with most parties, the person nearest the phone was, of course, not the person who lives in the house. But the guy was genial (happy drunk) and I explained that I was babysitting, my kids were sick and the parents should probably come home.

He says, okay, who are they?

I realized I had absolutely NO IDEA.

I’m sure when she called me, she’d said “This is Mrs. Such and So” or “Judy Such and So,” but it hadn’t stuck in my head. I looked around on the counters. They hadn’t started getting mail yet, so there were no clues. I couldn’t find a name anywhere.

I explain this to genial drunk guy, tell him the house address, and he offers to go around the party asking people. He’ll call me back. Um, no, because the phone number to the house isn’t on the phone. I don’t know what it is, either.

At this point, I felt like a complete bimbo. Not my usual competent self.

So, he sets the phone down and heads off. I listen to the party banter while my three miserable charges huddle in blankets on the couch. Eventually someone, probably wondering why the phone is off the hook, hangs it up.

By then it was getting late, so I hoped the parents would be home soon, anyway.

Then – Hallelujah! – the front door lock clicks and in they come!

They look puzzled. “What message? Our neighbor’s sitter called and said the kids were sick, so we decided we’d just come home, too.”

No, I say, that was me. I wonder if I got the address wrong, too. And I confess that I didn’t remember what their names were.

They were so nice to me and, yes, I babysat for them many times after that. I also asked new families to write down names for me and put them by the phone, just in case.

It turns out, bizarrely enough, that the neighbors’ kids *were* sick also and that sitter had called, just around the same time I did. It was a mini-flu epidemic and a bunch of kids got sick. My poor little girl ended up in the hospital for a few days, to replenish her fluids.

Elizabeth’s question reminded me of this story and I wanted to tell it to her. But, 1) it’s too long for comments and 2) I didn’t want to freak her out.

Of course, the advent of cell phones and texting has really changed this.

As long as the genial drunken parents pull their phone out of their pockets once in a while, just in case.