Skip to content
X
At the sight of blackbirds
Flying in a green light,
Even the bawds of euphony
Would cry out sharply. 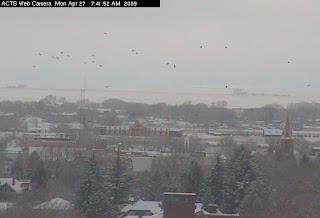 I caught this pic from the Laramie webcam yesterday morning. And right away thought of this stanza from Wallace Stevens’s poem, “Thirteen Ways of Looking at a Blackbird.” I referred to this poem before on Easter, though it was stanza V that time. (I don’t have to tell you there are thirteen stanzas, right?)

Why do stanzas from this poem flow into my head? I don’t know.

In this case, I love the phrase “the bawds of euphony.” I’ve never had much patience with that type. I once gave a friend of mine a copy of Anne Rice’s “The Witching Hour” to read and he came back with “don’t you think it’s kind of, well, dark?” Yes. Yes, it’s dark. And dark things are beautiful, too. Euphony is overrated, in my book.

Turkey vultures, actually. Many people think they’re eagles when they see them circling overhead, broad golden-brown wings angled to catch the rising thermals. Nothing so noble. We don’t have blackbirds here, like Wallace Stevens had in the low coastal farm country of Connecticut and Pennsylvania. We have crows and grackles. And the black silhouettes of vultures circling overhead.

Sometimes the light is decidedly green.

“More than any other modern poet, Stevens was concerned with the transformative power of the imagination,” Poets.org says. Maybe that’s why I like his poems. The imagination transforms the mundane, even the pleasant into something more. Some people think that means making something up, seeing something that isn’t really there. I think it’s being able to see beyond the ordinary that seeks to distract you with its daily dose of dullness.