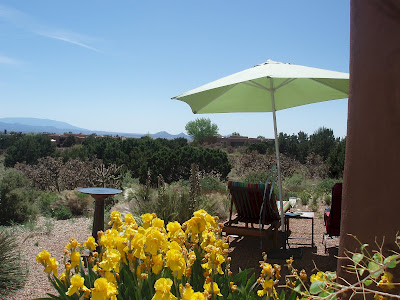 We didn’t go anywhere this weekend.

Lots of people did – packing up their camping gear or party supplies. David and I tossed it around, but we weren’t feeling the need to get away. Plus he’s still trying to get in the groove of the new semester, especially after the big Caribbean vacay. I’m back in the swing of writing, so we decided to hang at home.

And I decided to try something new: an at-home beach party.

One of my favorite vacations is hanging by the beach or pool (or a Tucson patio), reading and having drinks. So, once I hit my writing goals for the morning, I established myself out on our gravel “deck” with my Kindle and some wine. I finished some critique, got a bit of a tan and got to read Ilona Andrews’ new book Magic Bleeds. I’m loving the new installment, Book 4 in the series, and more, I’m really impressed by how they’re handling the series.

Much has been discussed lately about authors with faltering series. There’s a number of factors at play here. First both publishers and authors love a successful series because it’s good bread and butter work. An established series gathers a guaranteed audience. It’s fun for the author because she gets to really explore her world and characters. Readers love them for that same reason: tell me more, more, more.

But a few things can go awry:

1) The author never planned for the story to be a series. She can maybe eke the original idea into a couple more books, but then she’s spinning out of nothing. Sometimes there’s simply not enough depth in the original concept to carry the story that far.

2) Publishing pressure crushes the creativity. When an author is working on revisions for Book 1, on deadline to deliver a draft of Book 2 and a 10-page outline of Book 3, this can create unbearable pressure. Stories don’t always lay down and behave, which can lead an author to force it. And the story can suffer.

3) The author loses interest. I wonder sometimes about authors who are on the 30th book in the series. How can it possibly remain fresh, exciting and fun to write? But, by the 30th book, I imagine you’d have your pattern pretty established. Add these elements and tap it out. Doesn’t always make for as wonderful of a story though.

4) The cow is dry and the author keeps milking. Sometimes a series runs its course. It’s no longer fresh, new and full of juice. Everyone can think of television series that have done this. Sometimes a plot decision takes the story to its natural end and nothing can resuscitate it. Sometimes it just didn’t have that much juice to begin with. Sales decline, no publisher wants to pick up the next book. Time to move on to a new story.

5) As the overall story increases in length, less happens in each book. If you’re going to keep the series going and you’re committed to two books a year, which keeps you clothed, fed and with respectable shelf-space, it would be tempting to slow down the overall plot line. Instead of each book covering years in the characters lives, the pace slows to weeks and days. Sometimes over excruciatingly slow hours.

Anything that I missed here? I’d be interested in other observations of what can go so, so wrong.

Magic Bleeds is surprising me. This fourth book is possibly the best of the series so far, gaining in depth and resonance. I’m sure you can think of examples for each situation above. I’m thinking of one or more specifics for each, but not naming names. I love it when I find examples of a series that actually improves with age. So kudos to Ilona and Gordon, the husband/wife writing team that is Ilona Andrews — a fact that I think only increases the marvel and wonder of what they’re accomplishing.

(How do they not kill each other?)