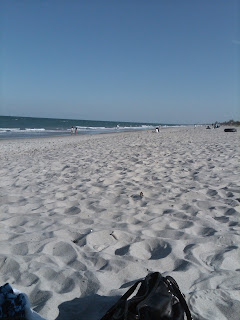 I finally made it to the beach yesterday.

No, there won’t be any “life’s a beach” titles or comments. Just the sheer pleasure of escaping from the strange veneer of Orlando to something that feels raw and real. To me, this is Florida.

Now, I know a lot of people don’t like the beach. They think it’s silly and boring and there’s nothing to do but lie around. I know quite a few men who think this way. Fortunately mine is not one, because I really love a beach.

Two of the gals I work with went with me and didn’t get there until late. We finished our work around noon, had lunch with the client and headed back to the hotel to swap our pumps and laptop bags for bikinis and sandals. By the time we stopped at the store and acquired sunscreen and beach towels, it was 3pm. So we arrived at the beach around 4:30, just as the sleepily sunbaked people were trailing away from it, pouring down the access ramps like so many towel-wrapped children ready to be bathed and fed dinner and cocktails.

But the declining Florida sun pumped warm and friendly. The ocean welcomed us with tangy blue swells. It soothes me, just to touch the water and be near it. To let the undulations of it move me. Sometimes I fancy I can touch every life touched by the interconnected oceans, as if it’s still the primordial soup that flows through us all.

Orlando can be disconcerting.

Not just the Disney area – though that long strip of International Drive is a strange blend of Route 66-flavor liquor stores and road stops, interspersed with every party-meal franchise restaurant imaginable. Along with the theme hotels and cartoon signage. Theme parks have proliferated in the area, like so many clones grown from the dispersion of tourist-dollar spores. There’s Sea World, Aquatica, Wet and Wild and Disney Beach. Epcot, of course, Dinosaur Land, Holy Land. Every theme imaginable has its park.

But what gets truly disconcerting is that the housing developments have a theme-feel. It’s hard to put your finger on the quality of it. They seem self-consciously pretty, with vast expanses of common areas that might accommodate a carnival at any moment. Even the downtown is composed of pretty buildings in shining glass and pastel colors. Each has an unusual, frisky roofline.

That’s when it hit us – nowhere were the sagging warehouses, the depression era buildings that have been desultorily rehabbed. Everything is of a certain era and aesthetic. It creates a sense that everything is a façade, that nothing is truly authentic.

When we were in Lincoln, Nebraska, I wrote about our debate over the aesthetic – or lack thereof – of the West. And I don’t like the lack of care that comes from that, the ugliness by default. The magic kingdom approach, though, seems like a relentless glossing of reality.
After passing downtown, we glimpsed off to the side a lake in a park. A boathouse and pavilion sat reflected on one end. It looked to me like old Florida, in its Spanish splendor. It could have been another facsimile. Old Orlando City Theme Park: come listen to the old-timey flamenco bands and eat cotton candy and get your Ponce de Leon souvenir doll, ride the fountain of youth waterslide!

Even in a glimpse, though, it had a feeling of age and authenticity, in a place where little else does. It managed to be beautiful, also.

A friend who grew up in Gatlinburg, Tennessee turned down a job in Gettysburg because she said she’d never again live in a tourist town. Tourism kills the soul of a place, she said. When I asked her why, she couldn’t explain it better than that.

I suspect it has something to do with creating an appearance to temporarily please. There’s no pay-off in substance when attracting tourism. All is for fleeting pleasure, not for long-term sustenance. In some ways, that kind of calculated prettification is as unsatisfying as leaving things ugly because it’s not worth the effort.