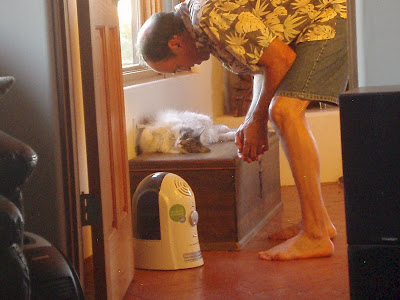 There’s this gal I know on Twitter, Keri Stevens, who’s been posting over the last week or so about this stray cat they took in. A cat that almost immediately produced three kittens. Bemused, she began suggesting kittens as Halloween gifts.

Then the story turned.

Keri doesn’t blog regularly, so the story has unfolded all in Facebook posts and 140-character tweets. But it turned into this kind of horrible, I-can’t-bear-to-look tale. She’d hoped to show her boys the miracle of life and instead they witnessed the blunt cruelty of nature. One of the kittens, Runty, was too small to nurse. Keri suspended all family plans over last weekend to stay home and nurse the kitten hourly.

Soon followed by another of its siblings. Keri grew increasingly despondent as the days passed and she reported the last kitten was growing weak and momma had moved it to a corner behind the desk. The vet thought that perhaps a kitten had remained in the cat’s womb, turning it septic.

Keri said that we should probably vote her Most Depressing Person on Facebook.

Of course, everyone offered her advice. And it was clear she felt crushed by the responsibility and by her failure to save the kittens.

Yesterday, after the third kitten died, Keri took her “free” cat, which in the end cost her nearly $1,000 to the vet to be spayed, to hopefully save her from the potentially septic womb.

The vet has never seen anything like it and thinks they may have been in another horn of the womb. These kittens, born a week after the first three, are much larger and healthier, which makes me think the first three were premature. This time, the vet is keeping the kittens for next seven weeks, to nurse them there and ensure they make it. A responsibility my friend gladly relinquished.

I told Keri she needs to use this story in a novel. When readers complain something like that could never really happen, she can say oh, no! It did! It did happen!

It seems we so rarely get the happy ending in real life. Part of it is the nature of storytelling. What will Keri post now? Kittens are doing great! Kittens are getting bigger! Kittens still doing great!

But now they have a special existence as the miracle kittens. No longer is this about a stray’s get that will have to be distributed around Halloween. The three kittens who didn’t make it are now just the darkness before the dawn.

After the dawn, the glory of that moment, we segue into the long day.

But maybe the sun is just a bit brighter.