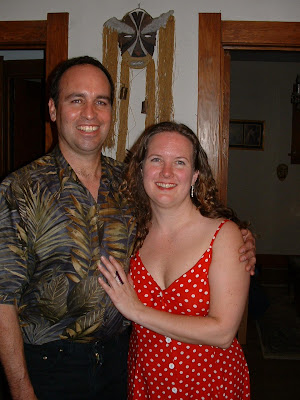 With any luck, this photo of me will get picked up as a current pic and everyone will think of me as 27 forever.

This was taken at the party for my Master’s defense.

I was beyond happy to be done, but it was bittersweet because I was supposed to have gotten a PhD. I spent six years, did all of the course work and all of the research for a PhD. And left with a Masters.

The same degree another guy in my department got for one year of histological work.

I’m pretty much over it now.

We watched “Dark Matter” last night, which has multiple resonances for me.

The movie (spoiler alert) is loosely based on what happened at the University of Iowa when Gang Lu, a Chinese grad student in Physics, lost his nut in 1991 and went on a shooting spree that included his graduate advisor. I’d been a grad student in Neurophysiology for three years at that point and had been shut down on my Masters bypass. Many were the jokes told that day about what we’d like to imitate.

By 1994, I’d made the decision that research wasn’t for me. They’d beaten it out of me. I cut bait, snagged a Masters for my trouble and worked on being a writer. At least the Masters got me a job with a decent salary. In 1996, I published my first essays and was part of a writers group, which included a gal who’d graduated from the famed Writers Circle MFA program at Iowa. Her good friend, Jo Ann Beard, wrote an essay in 1997 that was published in the New Yorker and then in her collection, Boys of My Youth, about Gang Lu and what happened. Jo Ann had been an administrative assistant in the Physics group and only missed being killed because she called in sick that day.

Dark Matter isn’t exactly that story. The way Jo Ann told it, Gang Lu was always a difficult, even scary, personality. Liu Xing, in the movie, is brilliant and misunderstood. Some critics have complained that the movie took the story in a different direction, because one of the writers drew on his own grad school experiences to show the other side of this kind of story.

The whole bit about how they beat it out of you. Liu Xing is not a team player and most grad advisors really hate that.

Looking back, I can see that my advisor and I were a bad match. From the begining, he didn’t like the way I worked. He had particular rules for how everything must be done. He was a manic/depressive Hungarian, so those rules changed. I was his first grad student and not a good rule-follower. He set out to prove that I could not succeed doing things the way I did and he ultimately proved his point.

Looking back, I could have done a few things. I could have recognized that I could never shine in that situation. I could have left. But I didn’t meet David until 1991. So I can’t wish that one away. At one point, a female professor on my committee tried to intercede. She got my advisor to agree to giving me a “Plan B” PhD, where I’d write a paper and go.

So, I don’t have an actual PhD. But I never went on a shooting spree.

I try not to regret what I invested in those years, because I deeply believe all our efforts are for a reason. The lessons all feed into something. Even if it seems impossible to discern what that might be.

Looking back at this picture, I see I was young. I had been full of ambition and hope. Like Liu Xing, I fancied I’d win the Nobel Prize. It’s probably the slap all young, hopeful and ambitious people must take. A slap that academia and graduate committees feel duty-bound to deliver.

Maybe the trick is to find a way to keep the hope and ambition, even after they beat it out of you.