I mentioned this before, the new research on jet lag. See, the way sleep works is, a person spends the first part of the night in Slow Wave Sleep (SWS), which is the deep, healing sleep. Dreaming or Rapid Eye Movement (REM) sleep occurs only in brief periods between the sometimes two-hours-long stretches of SWS. As the night progresses, the proportions shift, with more time spent in REM sleep and less in SWS. This is why you usually wake from a dream in the mornings, and you dream more if you sleep in. It’s also why the afternoon nap can feel so deadly — that deep sleep can be hard to shake off.

So, for those who don’t care to link to the article, the upshot is, even though you may adjust to a new time zone and sleep during the ambient night, the parts of the brain that regulate the sleep cycle may be continuing on their regular schedule. So when I flew to Hawaii, that meant my usual dreaming time of, say, 2am to 6am, was shifted to 10pm to 2 am, skipping SWS altogether if I didn’t go to sleep before 10. Which, erm, I didn’t. Now, if I adjusted to Hawaii time, which, after nine days, I likely did, now my dream time is occurring from 8am to noon.

The interesting thing is, the studies showed that if you don’t get enough REM sleep for a while, you start to get REM intrusion — which means your brain clicks into REM state even when you’re awake.

You know that surreal, dreamlike feeling? There you are.

So it’s hard to say which state I’m in. We’ll choose “deprived” as an umbrella term. Soon I’ll be overstimulated. Which is worse?

You be the judge. 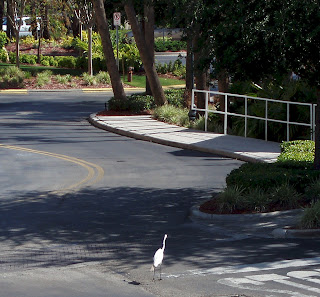 Yesterday morning, I propped open our hotel room door to enjoy the sunshine and warm air while I packed. When I wandered out to the balcony, a crane gracefully stalked past, heading through the parking lot to the sidewalk that leads to a little lagoon. Just another pedestrian. Today, the same time of day, but 2,000 miles to the northwest and about 7,000 feet higher up, all I see is the snow falling.

Don’t get me wrong — it’s very pretty. But this time of year, during winterspring, it gets old.

I started reading Lisa Daily’s book “Fifteen Minutes of Shame” on the plane home. She gave a couple of really useful workshops on publicity at the convention. I’m also liking her book — kind of a Jennifer Weiner chick-lit deal. But I really loved that her character flew from Sarasota, Florida to Chicago and emerged into a 23 degree snowstorm in open-toed shoes, with her winter coat packed at the bottom of her suitcase. The character reflects that although she looks at the snowflakes on the weather map, she still has a hard time really believing it will be like that.

I see this a lot. Since I spend more time in airports than any human being should. At baggage claim in Denver, travelers in shorts and sandals will stand at the belts while the suitcases gaily circle around, staring in dismay out the glass doors at the snow billowing outside. Maybe not dismay, but consternation. As if they don’t quite understand how both of their realities can be true: both the one they left only a few hours before and the one they stand in now.

It makes me think air travel is fundamentally unnatural. There is perhaps something about the way we understand time and place that conflicts with the speed of air travel.

Once, when I was in college, I took a morning flight from St. Louis to Denver for a job interview. Then I flew back to St. Louis that evening, because I had exams in the morning. For a day or two afterward I felt disoriented, as if I’d lost a day. Something about the back and forth left me only halfway present, the rest of myself somehow scattered in between the two cities, only gradually catching up again.

I see there’s a new pill for jet lag. What can we do about the self-lag?