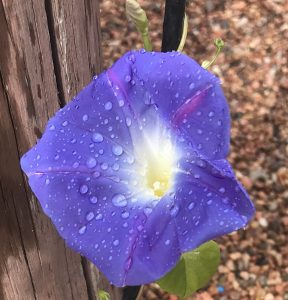 This slightly sodden morning glory was the last before the freeze, so I had to take a pic. Until next season, tender flowers!

So, last week I was at the nail salon. I go every-other week and see Ruby, who is a Mani/Pedi Goddess. I’ve been seeing her for two years now, so we know each other fairly well. She was asking me about Halloween and my plans – and I said I had Costume Pressure this year. I’ve been invited to a Big Shindig, hosted by George R.R. Martin’s assistant. Lots of Science Fiction and Fantasy types will be there.

Ruby asked if I didn’t have costume ideas, and I said sure, I could put something together, but I don’t really do Cosplay the way a lot of these people will be. A client of one of the other gals, overhearing, turns to me and says:

“Just go as one of George R.R. Martin’s characters. From what I’ve seen, all you’d have to do is roll around in the dirt!” And she cackles at her wit.

“I doubt George would find the humor in that,” I say, imagining the scene where I, a greatly junior author, turn up in dirt-covered rags and cheerfully announced to George that I’m Arya Stark. No no no.

Other Lady: Oh no – I’ve met George R.R. Martin and he has a *great* sense of humor!

Me: Yes, he does, but not so much about Game of Thrones.

Me: ~cringes in chair~

Other Lady: And do you know what he said? He said, “Tell her not to worry because I’ve got plenty more where those came from.” Isn’t that just too funny??

Other Lady: So see – he *does* have a sense of humor about Game of Thrones. So you should just go covered in dirt, say you’re one of his characters, and he’ll think it’s funny.

Me: I’ll keep that in mind.

It occurred to me to share this story, because I get asked a lot about Dos and Don’ts when meeting favorite authors. Is it okay to ask them to sign a book? Will they get mad if I ask when the sequel is coming? That sort of thing.

My usual advice is that most authors LOVE to meet readers and are happy to sign books and talk about them. I really love to hear which characters or stories are favorites and why. And sure, authors hear a lot of the same questions, but that’s generally okay. We also have standard answers for them. Good on George for being able to laugh as he delivered his standard answer to something he hears All The Freaking Time.

It totally amazed me that this lady could be so tone deaf that she had no sense of that – or how her dismissal of his characters as all covered in dirt wouldn’t be insulting.

So, how do you talk to authors at parties – or anywhere, really? Like you talk to any human being. With kindness and consideration.