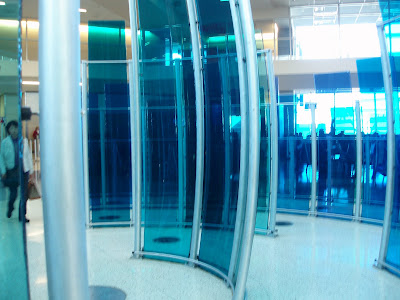 We left Santa Fe this morning at 4 am, the full moon dropping to the horizon as we made our way to Albuquerque.

I spend a lot of time in airports. But this is vacation, so I tried to set up this trip so we weren’t exhausting ourselves just to get there.

It ended up feeling like leisurely hopping, from Albuquerque to Dallas/Fort Worth, to Miami to San Juan. This is a really neat sculpture on the E Concourse at DFW. It makes music while you walk through it.

It feels like found art, except that someone put it there on purpose. It’s an unexpected delight, nonetheless.

We’re spending the night in San Juan. Tomorrow morning we’ll hang by the pool. I’ll get a little writing done. Then we’ll fly to Tortola and take a ferry to Virgin Gorda. I like this wending. With every stop, the weather has warmed and moistened. With each stage, the pace slows and we ratchet down to match.

(For my work cronies – we’re staying at that same Isla Verde Embassy Suites. And the access road is still torn up in exactly the same way. It’s as if time hasn’t passed.)

This evening we had dinner and drinks on the beach. And I got to meet up with Melissa Arroyo, FFP’s conference coordinator this year. She and I had only met online before this, so we had fun talking in person. She’s a real dynamo. Now when we meet at the September conference in New Orleans, we’ll recognize each other.

And son of a gun, this evening? There was that full moon again, rising up through the palm trees, seeing us on our way. 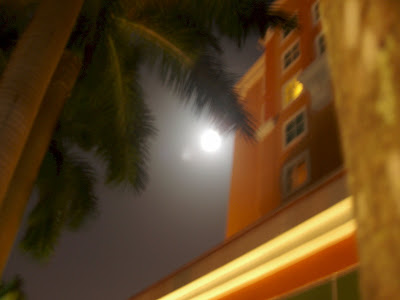 Mary Karr, who used to be one of my writing heroes, until I wrote to her, sent her MY memoir/essay collection shortly to be published, and asked her for a blurb, and she didn’t bother to answer. Of ALL the people I asked for blurbs, she was the only one to totally blow me off.

At any rate, I felt special because I loved “Cherry” as much as “The Liar’s Club” — and I think I’m about the only person on the planet who did. But did Mary care?

So, here I am, five days longer than I wanted to be in a Hampton Inn under renovation in Lansing, Michigan, where I get a USA Today that I don’t want, every day outside my door. And here’s an article on Mary, and her new book “Lit.” Where she says, and I quote: “There are too many books. Most writing is mediocre. Most memoirs are mediocre. Quality is rare.”

Thanks Professor Karr. Way to attempt to perpetuate the rule of academia. I won’t mention how EVERYONE ELSE thought “Cherry” fell short of mediocre. Perhaps that was yet another book too many.

(I could point out here that her last book was pubbed ten years ago, in 2000, but that might be petty, so I won’t.)

So, I read that this morning. And thought about it off an on all day.

Not that I’m brooding.

Then, this evening, one of my old friends posts on Facebook “Howcum I just lost interest in my own book? O. Could it be because I’ve been writing it for EIGHT years?” Old literary-type friend. From my writing group of many moons ago.

All of my genre-writing-buddies, both pubbed and unpubbed, are heavy into NaNoWriMo — National Novel Writing Month. The idea is to take the month of November and write 50,000 words. Which is really novella length, but who’s counting?

I can’t tell you how many times I’ve been asked if I’m participating. There are buddies. And groups of buddies. Word count scales, twittering and lashing one another on. The genre writers welcome the opportunity to churn out another manuscript in a month’s time or so.

Mainly, because I tried it last year and, while I got 36,000 words that I mostly like, I don’t need the additional pressure. And I’ve been telling them that I like my process.

Which is the truth. I do like my process. Which I’ve spent the better part of a decade refining. For better or worse.

As usual: I fall somewhere in the middle.

I wish to spend neither eight years nor one month writing a novel.

Sometimes I feel like a pariah from both sides of the camp, neither of which acknowledge the other. I think Mary Karr is pretentious and full of shit for saying such a thing. I also don’t believe the fast-draft process, novel in one month thing, works very well.

And someone save me from spending eight years on one book. Or worse, ten, and being snooty about it. 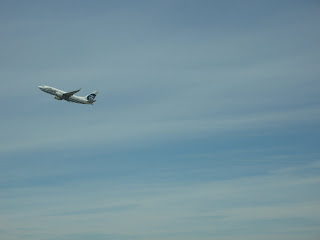 A story in pictures for you today.

Because it’s been a long one. And I’m pretending I can be Heather Armstrong.
No, really. Don’t laugh. Just let me work on it.
So, we left Laramie about 7 o’clock last night, Saturday night, to stay at a hotel near DIA. To stay at the Hilton Garden Inn, for something like the third time now, to take advantage of their stay & park deal. I know I’ve mentioned how much I like Hilton. Granted, we had all day to hit the trail, but we ended up leaving later than we thought, after cleaning out all the flower beds, planting alluring new flowers, mowing, weed-whacking, house-cleaning and packing. 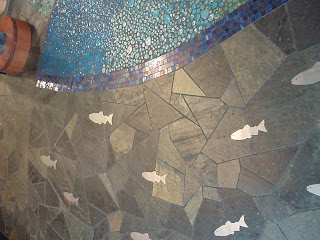 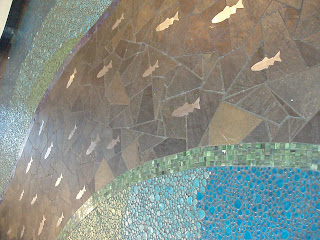 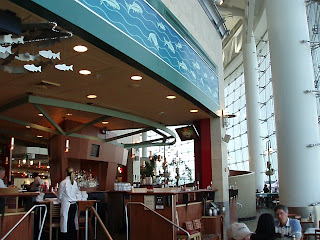 That’s right — boozy lunch at Anthony’s! (With super cool fish mural on the floor and even better share of the spectacular seismic-tolerant atrium in the Seattle main terminal.) After lunch? That’s right: practice photography skills, because you’re too cheap to cough up $7.99 for WiFi.
Just watch — I’ll get better. 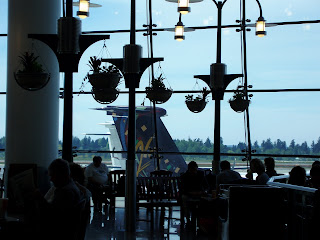 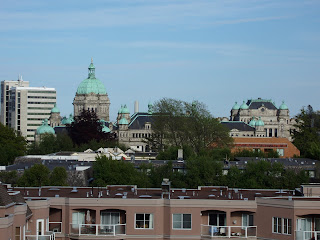 Made it to Victoria. Hotel Oswego is lovely. Balcony with a view of the Parliament Building, the Olympics and the Inner Harbor. Plus wine in the refrigerator.
It’s like we already have our Victoria condo. Good practice. 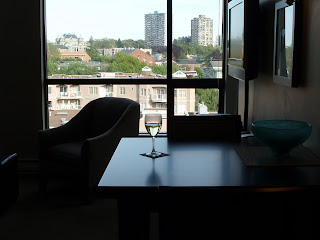 I have to wonder what’s up with sink stoppers.

I mean, are we really at state of the art here? I’m in a very nice Hilton. And, if i haven’t mentioned, I love the Hilton chain. I love them better pretty much with every stay, which is saying something. They work hard to give me everything I need to make it bearable for me to be on the road so much. So, (nod to Penelope Trunk and her promo links), here’s the free promo, Hilton. Full disclosure: I’m a Hilton gold member, which just makes it all the better. Nothing like a premier program that really makes you feel special and gives you perks you actually want to have.

But the damn sink stopper doesn’t work. I don’t lay this at the hotel’s feet. Were I filling out the survey, I’d have to say, no, I didn’t report the problem and therefore gave them no opportunity to fix it. Because I’ve grown tired and jaded and have reported this problem at multiple hotels in multiple cities in the past and they maybe don’t fix it or maybe fix it and it breaks again immediately. In fact, I get so disappointed when the sink stopper seems to be fixed and then gives way, that I’d rather not have my hopes raised.

I know this sounds silly. But I wear contact lenses, the non-disposable, semi-soft, oxygen permeable kind. Which means they cost $150 each. I don’t mind this, because they last for years. As long as I don’t lose them. Like, down the drain, for instance.

No, I don’t want to have LASIC — I see better with my contacts than EVERY person I know who’s had any kind of vision-correcting laser surgery. Color me deeply unconvinced. Let me keep my contacts and let me not wash them down the drain while cleaning them for the night.

Here, I am, in my lovely hotel room, with my Kindle 2, my Blackberry Storm, my Dell Latitude laptop and my Heys plastic luggage. Oh, and my new laptop bag. All pretty much state-of-the-art technology, at least for a luddite like me. But the sink stopper construction is the same technology that’s been in use for, near as I can figure, the last 40-50 years. The same that I’ve been crawling under sinks and adjusting for my entire contact-lens-wearing life (which is 32 years now, for those keeping count). Did all the plumbers gather together, decide rubber stoppers were passe and the stick/pulley design could never be improved? Am I traveling with a plastic drain screen because I’m the only one who has a stake in whether the sink will seal?

Yeah, yeah, I know — everyone else has had LASIC.