Skip to content
IV
A man and a woman
Are one.
A man and a woman and a blackbird
Are one.
I recall this one particularly annoyed one of my classmates, long ago back in AP English at Overland High, lo these many years ago.
I wanted to ask him how many wedding ceremonies he hadn’t sat through, not to hear this kind of claptrap before. Leave the parents and cleave unto each other. Like the joint candle and blow out your own. I’ve always imagined Wallace Stevens sticking his tongue in his cheek for this one. If a man and a woman can be one, no reason you can’t throw a blackbird into the mix as well. Not unlike Steve Martin’s classic scene in The Jerk, leaving and taking the only thing he needs, gradually adding more and more useless items. After the initial assumption, it doesn’t really matter what else you add in.

Don’t change what all you’re piling on top; change the initial assumption.

There’s an idea out there that things don’t and can’t change. When people talk about efforts to address environmental issues and global climate change, there’s a thread running through the arguments that this is how things have always been. That change is impossible. What we don’t always have a good perspective on is how much things have already changed.

David sent me the letters below. The Game & Fish crew found these letters from 1932 when they cleaned out some old files. Hopefully you can read them — I made them as big as I could. You might have to use your screen zoom. 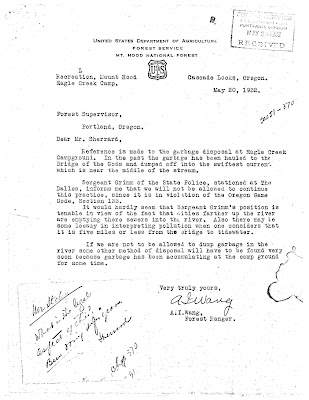 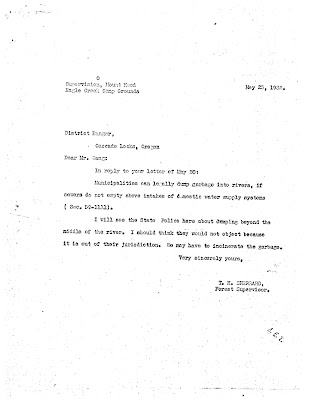 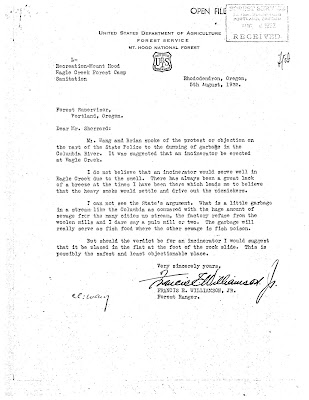 It’s shocking, isn’t it, that they’re arguing about dumping garbage in the Columbia? After all, they’re very careful to dump it from the bridge in the best spot, with the swiftest current. You laugh to read it.

And that’s a mark of change.

It’s something to think about, amidst the shouting, wailing and gnashing of teeth that things can’t change. Someday, someone like yourself might look back on the debates of today and be amused that there was ever a question.