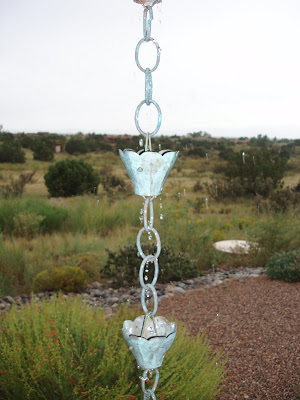 Rain again this afternoon. So here’s a photo of the rain chain my fab co-workers bought me for my birthday (by way of a High Country Gardens gift certificate — thanks gals!). The chain funnels the outpour from the canale, which drains the rain from the flat roof. I probably didn’t capture it well, but imagine the musical sound of rain running down the links and tulips, into the basin below.
Ah yes.
My mom sent me an article Frontier Airlines’ recent “save.”
As in, saved from losing their identity by being subsumed by Southwest. She figured I’d care because I’m a fan of Frontier. I’m a premier member with them even. A lot of loyalty under the bridge there.
I’ve been trying not to notice the strain on it lately.
Kind of like when you begin to notice the things you don’t like in your lover. The little things that maybe once were charming. Or that you’re pretty sure he never used to do. And you think, that’s not such a big deal. I can live with that. Maybe the nose-picking is just a phase.
But, under it all, you know you can’t ignore them forever. That these are the warning signs. The ones you’ll sigh over to your girlfriend over key lime martinis later, saying “Jesus, I knew when he started in with the nose-picking that it was all over.”
Frontier has started to annoy me. And we had such a good relationship for such a long time. But, you know what: they’ve started to take me for granted. No more automatically assigning me seat 2A, unless I buy a certain class of ticket. The first time it happened, I was stunned. Certain there was a mistake by the automatic kiosk, I asked the agent why *I* was in a middle seat??
“I always am just in 2A. Always,” I told her. And I tried really hard not to sound snotty. Which I know sounds unlikely. But you have to understand, me and 2A, we go way back. It’s gotten so I don’t even have to look at my boarding pass, I can just get on the plane and sit down. When you’re on airplanes as much as I am, this is a precious gift. Anything I don’t have to think about? Sign me up!
But no. And she was mean to me. Here I am at the premier desk, and she treated me like I was just any passenger being difficult. I can be just any difficult passenger on every other airline. At Frontier, I had to come to love that they treated me being difficult as their privilege to resolve.
Call me the high maintenance girlfriend.
So, he doesn’t care so much as he did. He’s got financial issues and he’s not interested in wooing me any longer. He absentmindedly picks his nose. I thought it was enough that I stuck through the hard times.
What gets me about the article?
The penultimate line: “We still haven’t seen the return of the business traveler.”
Hello? What about me? Your loyal business traveler who told everyone Frontier would survive the bankruptcy. Who stuck with you while her perks diminished and you couldn’t take her to all the big hubs anymore.
I’m sitting right here and you’re out looking for other women.
I don’t think so.