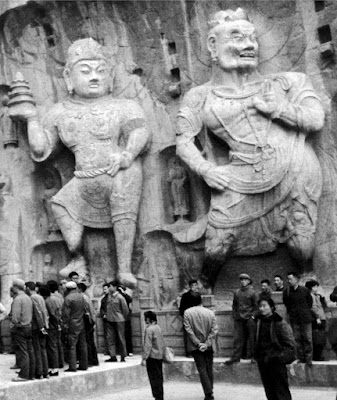 I love this image.

One day I’d like to journey to the remote part of China where this cliff-carving is, just to see it for real.

What I love is how the sculptor(s) capture the sense of movement and joy. The Bodhisattvas, though captured in stone, are dancing.

To me, that’s what life and enlightenment are about: being so filled with joy that it moves you to dance.

Lately I’ve been feeling sensitive to anger. Maybe it’s just a symptom of bad economic times, but I’m noticing so many harsh responses on a variety of fronts.

I’ve been noticing writers criticizing other writers in mean ways. Or making lists of things they think writers shouldn’t do.

One of my favorite bloggers, Heather Armstrong, finally listed with ads all the hateful comments she receives, figuring that if people are goling to pour out that kind of hate, she could at least get revenue from it. I notice she’s taken the page down now. I read a bit and felt so soiled by the things people said that I couldn’t bear to keep going.

A colleague sent a “funny” email to me that was a collection of pics of office refrigerator notes. Again, the parade of passive/agressive rage at people who took or molested food from the communal fridge only left me feeling sad.

Granted, I’m not good with anger. I’m one of those people whose parents never fought in front of her, so she doesn’t like to see people fight. When I hear people yell in anger, I physically flinch. I feel emotionally slapped, even if it’s not directed at me. I’m a big believer that you don’t talk when you’re mad, because once something is said, it can’t be unsaid, regardless of apologies.

In short, I’m a total pansy about conflict.

I know that conflict is part of life and one must deal as it arises. And yet, I think there’s nothing wrong with focusing on the positive. In fact, I think it’s crucial to find the joy and not the rage. I suspect there are very few exceptions to the old rule, that if you can’t say something nice, don’t say anything at all.

It’s hard for me to imagine the dancing Bodhisattva’s leaving hate comments on someone’s blog.