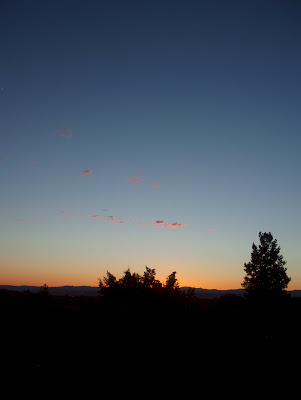 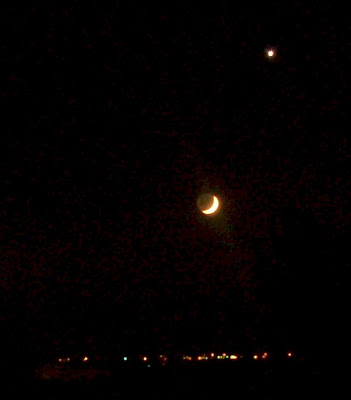 The moon and Venus last night, from our bedroom window, with the lights of Santa Fe below.

Not perfectly crisp, but close.

I’m feeling creaky today. On Sunday I engaged in a major weed-pulling effort. I reaped the reward of all the laziness I sowed the last few weekends, which means it took me a few hours. Of bending and pulling. Only a little sore in my muscles yesterday, I didn’t give it another thought.

In college, I briefly dated a ballet dancer. Beautiful body, but unfortunately quite wooden in bed. At any rate, he told me that they’d learned that it takes a full night and day before you feel the physiological effects of something. So he’d feel a grueling dance workout, not the next morning, but the following one. Same for eating heavily or lightly. It’s an interesting tidbit of information, but it probably says something that that’s what I remember best about him…

Yesterday, my 1.85 K was more difficult than Sunday’s.

Sometimes I think writing can be like working out. On a given day, it’s not hard to stretch yourself and go the extra mile, do a bunch of yardwork, add some weight to the machine. You might not even really feel it the next morning. But after two days of it, I’m feeling a little tired in my brain. It doesn’t make sense to me that I’d have only so much writing energy, but I keep running up against that.

It would probably make more sense to gradually add words, like I gradually increase the weight I lift or the distance I run. Mental conditioning, as it were. Or Creative Conditioning. An extra 50 words a day and soon I’m staying up all night writing Interview with the Vampire in less than a week.

(Though I’m fairly convinced cocaine was heavily involved in that particular effort.)

So, here I am, warming up, stretching my muscles. Bouncing up and down a little to juice up those ligaments.

It will feel good when I’m done.