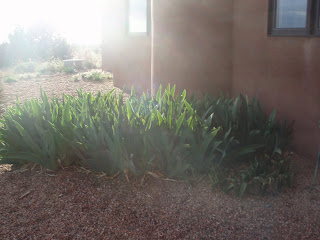 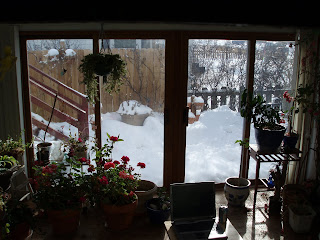 This morning, I finished putting out the plants.

Another annual ritual completed. A labor-intensive one. We have this sunroom, one of the things I love most about this house, where I overwinter all sorts of potted plants. Once I feel more or less confident that the spring snows are over, I begin shifting the plants out to the patio, gradually hardening them off.
For those who aren’t experienced with this, indoor plants transpire more moisture through their leaves, because it’s a moister, more contained environment. When you move a plant outdoors, especially in our arid climate with the intense mountain sun, you have to do it gradually, to allow the plant to acclimatize. The leaves get waxier in some cases, and the transpiration pores shrink. Depending on the plant, they also develop a bit of “sunscreen.” Putting an indoor plant outdoors and leaving it there is akin to sticking a Wyoming person on the beach in Florida for the day. Not pretty.
So the first day, you put the plant out for an hour or so and bring it back in. Becauase I have way too many plants, on this schedule, by the time I got them all out, it was just about time to bring them back in again. The second day they can stay out for three to four hours. The third day, yesterday, they stayed out all day and came in at night.
Finally this morning I set them out in the permanent summer spots. No more dragging back and forth. There they’ll stay, unless we get a freak snow storm, which hopefully I’ll know about before it hits.
It doesn’t escape me that this is another last, the last time I’ll perform this ritual in this house. With our move in mid- to late August, the plants will all be still in their places. On my list: find out if I can bring plants into Canada. It sounds silly — maybe not worrying about whether a carpet is happy silly — but some of these plants I’ve had for twenty years. The bougainvillea that David and I bought in the first apartment we shared, back in 1991. There’s my hibiscus, inherited from Val when she moved to Seattle, grown from her grandmother’s plant in Casper more than twenty years ago. I really want to take the orchid David gave me for Valentine’s in ’95 — I’d love to give it a climate where it might do more than subsist.
Perhaps I’ll have a big plant sale. Maybe I’ll just give them all away to good homes and start new. 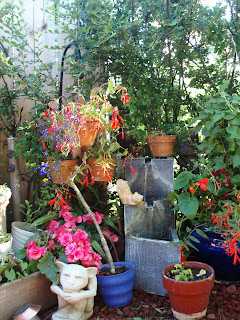 I won’t have this ritual in Victoria, I think. Freezes there are less rare. I don’t know if people leave plants out all year and only bring them in when there’s threat of frost. Something I’ll learn.
I do know this: the first thing I’m going to do is plant wisteria. Always wanted wisteria.