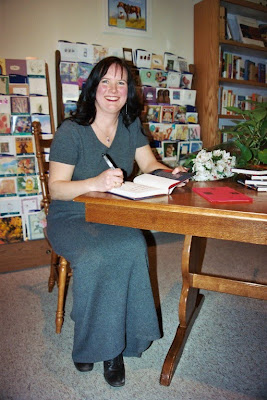 I love bookstores. And libraries.

I suspect all writers do, because we all started out as readers. My mom would take me to the library every Wednesday afternoon where I was allowed to check out five books at a time. (My mother’s rule, not the library’s.) I would have to make those five books last all week. Wednesdays became my favorite day of the week.

Then I started getting an allowance and was old enough to go to the mall by myself and I discovered bookstores. When you could buy the book and keep it forever and read it as often as liked, at least until it fell into tatters. Not that I didn’t have lots of books, but now I could have the ones I picked out for myself.

Even better, the bookstore people were as smart as the librarians, but they could talk without whispering and could show you new authors you’d never heard of!

Everywhere I visited or lived, I would check out the local bookstore. It was part of the character of a place for me. I liked talking to bookstore people. When I began to write, and my own book was published, the independent bookstore people were the ones I turned to. My favorite local store sponsored my book launch party.

All of this is on my mind because Neil Gaiman referred to this blog post of his via Twitter.

Now, if you’re like me, you’ll want me to just tell you what it says so you don’t have to go read it. Though it’s an interesting read.

Basically an independent bookseller is castigating Gaiman for a free Harper-Collins download and accuses Gaiman of not caring about the survival of booksellers. Which Gaiman refutes. He also says, and this is what’s interesting to me:

My local bookshop (now deceased) was physically arranged so that finding a book and then buying it was harder than walking around around the shop and going back out again; the bookseller mostly sat at the cash register in the middle of the shop playing online chess, and he tended to be unhelpful, vaguely grumpy and to treat people who wanted to buy things as nuisances (he was nice to me, because I was me, but still); he didn’t stock paperback bestsellers because “people could always go to Wal-Mart for those” and when the she shop closed its doors the final time they put up a note on the door saying that it was Amazon.com that had driven them out of business, when it manifestly wasn’t — it seemed to me that they didn’t work to entice people into the bookshop (which is what those paperback bestsellers were for), and didn’t give them a pleasant experience when they were there…

I knew exactly what Gaiman’s referring to. David and I even spent time helping a young, enthusiastic manager of a local store rearrange the shelves to prevent this exact situation. The owner for time out of mind, put the shelves back the way they had always been.

The young, enthusiastic manager was terrific at selling books. She learned me and what I liked. She became like my crack dealer, luring me to the shop with books I couldn’t resist. She would call or email me and say “Such and so author has a new book out next week — I knew you’d want it, so I put it on order.” And, of course, I couldn’t resist. She passed me review copies of new books to read and give my opinion on. She asked customers who were fans of particular genres to set up recommended reads tables. When I did my taxes, I noticed that a huge chuck of my book purchases went to that store.

Of course she didn’t last. And now the owner has everything back the way it always was, the recommended reads are only “literary” ones and I stopped buying books there. Amazon was faster, easier and more fun.

What I’m thinking happened is this: back when I discovered bookstores, those were the only places to buy books. I was happy to get whatever they threw my way. Then came the BIG bookstores and they were like the candyland paradise in Charlie and Chocolate Factory — everywhere you stepped, you could simply pluck a wonderful book off the shelf. Then came Amazon, where you could access paradise without leaving your house.

I love bookstores. Always will. But the bookstores no longer always give me what I want. I don’t think the solution is for them to try to change me.

5 Replies to “Your Local Bookseller”