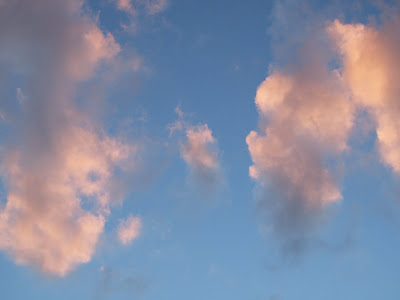 This reminds me of hot summer afternoons, lying on suburban lawns and watching the clouds drift by. These are from sunrise this morning, though, thus the pink, and I was never up that early in my teenage summers.

Irene Goodman, described as a “leading literary agent in New York who has has many New York Times bestsellers,” which means she’s one of the hottest agents out there, authored an article for the September Romance Writers Report. (RWA’s industry magazine.) She titled it “Common Mistakes by New Authors” and lists five mistakes. Of those, three are related to genre:

1. They don’t pick a genre and stick to it.
2. They choose uncommercial subjects.
3. They choose genres that are out of style.

(The other two are about plot and conflict/tension.)

This article immediately annoyed me. I can see her points, sure, but I think the article could be better titled “How to approach your writing like a product.” To me, this is something for the agents to think about, not the writers.

I could be wrong, but hear me out.

Genre is a marketing thing. It’s a false line drawn to give bookstores and libraries a way to shelve books. It’s intended to give readers a way to find the kind of book they love best. Music and movies are divided up the same way. And we have all had that experience, as readers or listeners, of vainly searching the shelves for a particular author or movie, only to resort to the teenage cashier with a slow computer.

“I think this movie is drama, but clearly you guys don’t.”

I have had this conversation any number of times. I’m sure you have, too. And who knows? Maybe the writer and director absolutely believed they’d made a comedy and I’m the odd one focusing on the drama. Or, maybe they made a drama and the marketers said, look! right there, someone laughed! and stamped the nicely selling “Comedy” label on it.

I’m seeing a lot of this from agents lately, that we as authors should know what genre our book is. They consider it fundamental. Irene says that we should pick a nice, fashionable and commercial genre and write exactly that book. This completely ignores the fact that most writers aren’t writing genres, we’re writing stories. Once we’re done, and we’re writing up our queries, we tilt our heads at it and say, “well, it’s got an urban fantasy premise in a non-urban landscape with high fantasy elements and also contemporary romance… I’ll call it dark fantasy.”

Yeah -all you agents out there (I fantasize that you read my blog – I have a rich imagination) are clutching your heads in despair. We’re sorry. We really are. But you knew we were doing this, right?

Fact is, I have two writer friends with books coming out soon, who were coached to revise their books towards one genre or another, after they had the publishing contract. I suspect this happens a lot. And really, both were fine with it. Shape it in this direction? I can do that. Plan it that way to begin with? That means you’re planning a product, not spinning a story. To me, as a writer, the two come from very different places in myself.

I’ve been president of the Fantasy, Futuristic and Paranormal chapter of RWA for almost two years now and a frequent topic of debate is which genre to sandwich a story into. We’re obviously a polyglot of a chapter, with writers of Science Fiction Romance, shape-shifters, time-travel, vampires, swords & sorcery, ghosts, everyday magic. Really, if someone writes anything kind of weird, they end up with us.

I absolutely understand that this is something that publishers, editors and agents have to think about. That’s their business. I suspect it’s an interesting aspect of the business for them. I would think they’d have to get really good at it, to succeed.

However, I think it’s a mistake to exhort writers to get on board that wagon.

And let me say, right here and now, that I do believe the agent/author relationship is a partnership. You have to work together for mutual success. Maybe it’s just me, but it’s very difficult for me to look at my story, which is this great swirling mass in my head of faces and feelings and conflicts and desires, and slap a label on it. If someone else looks at it and says, well, with a few tweaks, it would fit nicely here, I would be grateful.

To me, that’s part of what an agent brings to the relationship. You wrote it, now I’ll help you sell it.

Finally, the other day I watched Oprah’s interview of JK Rowling on You Tube. (It’s well worth watching and broken out into segments so you don’t have to commit to the whole thing at once.) At one point, Rowling talks about signing the publishing contract for the first Harry Potter and how her agent said, congratulations, but you’ll never make any money writing children’s books.

Of course, Rowling is now the only billionaire writer in the world.

I totally don’t hold this against her agent. Harry Potter could be slotted as a children’s book and they didn’t make money at that time. They were uncommercial and unfashionable. But if you walk into a store today, to buy a Harry Potter book – do you head for the children’s section?

Yes, I know Harry Potter was an unpredictable phenomenon. Like Twilight, like a bunch of others we could name. They broke new ground, because they were new stories. Genres lines are bent to accommodate them.

I wonder, if those new writers had followed Ms. Goodman’s advice, would they have written those books? Of course, 99% of us will never become phenomena like them, so maybe it’s good advice for the working writer. And yet, I think most of us write, not to churn out a product, but because we become obsessed with a story.

Of course, we’d love to sell it, too. Have patience with us. Help us out here.