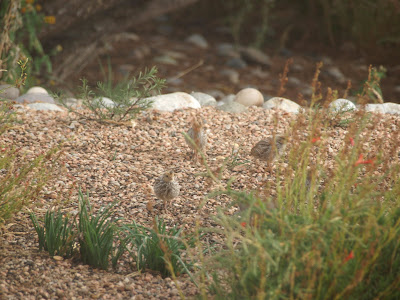 Yes, I know, what you’ve been thinking. That what this blog needs is more baby quail pictures! 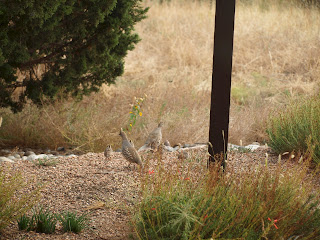 help us out. Mom and dad escorted something in the neighborhood of a dozen chicks to pick under the bird feeder. It’s really impossible to count them, the way the little puffballs swirl and scatter. They really blend, too.

All gambits to increase survival for these little snack-sized portions.

The sheer number of chicks is, of course, one way that the quail ensure a few survive. Though the parents are also diligent in their care. In population biology, this is referred to as the r-factor. At one end of the spectrum is the capital R, with humans being the most extreme example. Very few young are produced, they are in a helpless state for a long time and require intensive parental investment to survive. On the other end are animals like insects, that birth thousands of offspring that are nearly mature at birth and receive no parental care at all. They’re on their own.

The quail made me think of this, but the discussions on bullying have, too.

A friend I met on the first day of first grade, and who I knew through all of high school and now talk to on the interwebs, posted a letter to several of us on Facebook, thanking us for standing by her while she was bullied all those years. The thing is, I never knew she’d felt bullied. I understand from these stories that people are stepping forward to tell, that often the friends don’t know, that the bullies attack when the victim is alone. And the victims of bullying rarely tell their friends or family how bad things are.

Now, I did know she was kind of a social outcast, but then, so was I. Neither of us were in with the popular girls. I had a particular pack of popular girls who liked to pick on me, but I was arrogant enough to be certain I was smarter than they were and I didn’t hesitate to let them know it when they got going on me. My brand of self-defense. Also my way of protecting my self-confidence.

We don’t like to think of ourselves in terms of population dynamics, but bullying really is the animal condition in action. All animals attack the weak or different. Albinos are expelled from the herd. Males that lose dominance battles become “losers.” There are fascinating behavioral studies showing that, once an animal becomes a “loser” it can’t win a dominance battle even against a smaller opponent. Only unless two “losers” compete against each other can one become a “winner.” Interestingly, that “winner” can then go on to defeat opponents that defeated it before.

Of course, humans bring emotion and psychology into the mix. Thus the bullies are usually those who have been wounded themselves. And those they pick on aren’t necessarily those whose presence weakens the herd, but those who are vulnerable to attack.

We feel like adults in those high school years, but we aren’t. We’re still maturing, under the care of our parents, though these are situations they can’t protect us from.

I know there’s not a clear answer. I like to think if I had known what my friend was going through, I would have stood up for her. Maybe it was enough that we were the friends that we were and that gave her some strength.

Sometimes I think it comes down to surviving until you’re stronger. Hide from the hawks, the coyotes and bobcats until you’re not quite such an enticing snack.

It does get better.