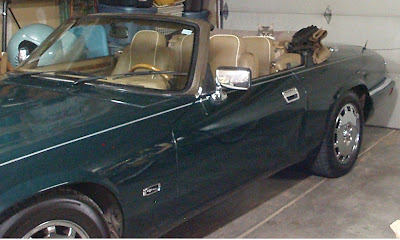 Another in the “Isabel gets to sleep wherever she wants to” series. She spent several hours napping in the folds of the convertible hood.

It also gives her a good vantage point for mouse-hunting, which is always on the approved activities list.

I was thinking the other day how I’ve long had this tendency to mix things up. For example, there was my whole Ben Affleck/Ben Stiller, Matt Damon/Matt Dillon mix-up.

Yeah, my friends made fun of me no end for that one – you don’t need to chime in.

But see, let me explain. First, my brain apparently indexes by first name. No, I don’t know why. In my skull space, Damon and Dillon are really similar words, too. It’s a cadence thing. This was back when Good Will Hunting and Something About Mary came out. Both got lots of buzz and I read articles about the Ben Affleck/Matt Damon screenwriting team and how clever they were. Ben Stiller was just really starting to impinge on our consciousness as a comedian and Matt Dillon got nice write-ups for his performance in Something About Mary.

So, at some point I decided that Ben Affleck and Ben Stiller were the same person. I don’t know, maybe “Affleck” was too hard to remember. So I had him as the same guy in both movies. They kind of look alike don’t you think? If you put the difference down to make-up? No?

But where I got really messed up was that Matt Damon and Matt Dillon arguably look absolutely NOTHING alike. I kept looking for Matt Damon in Something About Mary and not seeing him. People said, oh, he’s the private eye and I would study him thinking, whoa! that’s some seriously good make-up.

I finally got it sorted out and it’s even more laughable now, given how all of their acting careers and public scandals (or lack thereof) have since diverged.

It came to mind when I did it again the other day, mixing up authors Jennifer Weiner and Jennifer Crusie. (See? It’s the first name indexing again.) That’s not quite so terrible, since they write books in similar veins.

It occurred to me though, that this silly flaw of mine, this tendency to mix things up, is parallel to how I draw disparate ideas together and tie them up in essays and stories. Readers often comment they like that about my work, how I bring things together they hadn’t thought of before.

Shakespeare used that theme a lot – how the hero’s strength (yes, it was always the hero and female characters were mainly foils, alas) also contained his fatal flaw. And the fatal flaw is what would bring the hero down in a tragedy. It’s interesting that, in a life, our flaws can contain the seeds of what makes us special.

Maybe that’s part of what being true to yourself is all about.