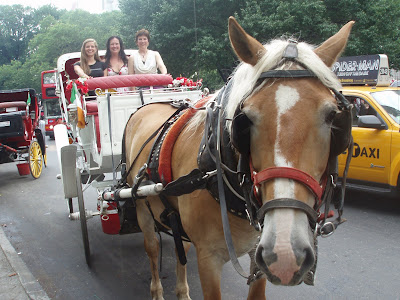 So, with no need to attend the business meetings, we took off on a long walk with my roommates. The lovely Tawna Fenske already did a blog post (she’s so efficient) about me and Marcella as bunk mates. The thing is, we had a great time together. I wanted to see Rockefeller Center, Tawna wanted to see Central Park.

Of course we did the carriage ride.

Our driver had a lovely Irish accent, too. Amusingly his patter consisted of him pointing out sites where movies had been filmed. Most of which we’d never seen. I finally asked him if he’s a movie buff and he admitted that, no, it was just part of the job. He seemed surprised to be carting around a carriage-full of romance writers, particularly when I told him what I write.

More and more, conference for me is about spending time with friends like this. People I usually only “see” online. Laura Bickle is one of those. She arrived later that day, with just enough time to tie a little wine on before I had to work the registration desk before the signing. 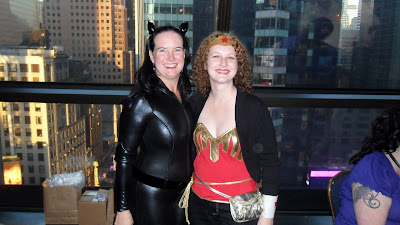 Turns out that’s a great time to work the desk, because a lot of the big authors arrive right before the signing. The best part? They’re all registered under their REAL names.

So when Eloisa James stepped up and I couldn’t find her packet, I had to ask her if she has another, legal name. At this point, they look abashed and glance around to see who’s nearby. She leaned over the desk and said, “…” See, I swore not to tell. But I learned at least five secret identities. And yes, it’s totally enough just to know that I know the secrets.

The other funny thing was that the big speakers, like Diana Gabaldon, were done the great favor of having their registration stuff put in their rooms. Only a lot of them hadn’t BEEN to their rooms yet. Ironically, they couldn’t enter the signing without a name badge. When I told Diana her stuff was in her room, she gave me the terrified puppy-dog eyes. This was half-an-hour before the signing. She was afraid that, if I sent her to check-in and go to her room, she’d never make it through all the people in the lobby.

I ranted once before about how writers will never be rock stars. But Diana Gabaldon at a huge gathering of romance writers and readers? Totally a recognizable rock star.

We printed her up a special name badge. She was charming and grateful.

As I do every year, I also attended the Secrets of the Best-Selling Sisterhood seminar with Jayne Ann Krentz and Susan Elizabeth Phillips. This time I asked how they’ve maintained their friendship over all these years – if they have strategies. They seemed taken aback by the question and I wondered if maybe it wasn’t always easy. Finally they said that they don’t live near enough to irritate each other. 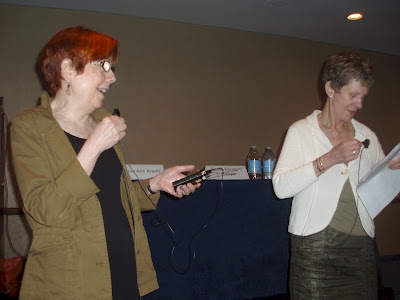 See? Just another reason to value those online friendships.

But it was really lovely to spend some in-the-flesh time with them, too.

4 Replies to “With a Little Help from My Friends”