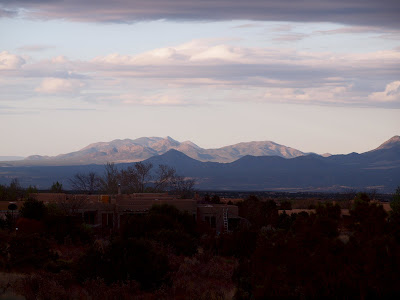 I missed the moon this month.

Back in September, I promised to do a post each month on the full moon. I’ve hit them all until this month. I don’t really know what happened. The Planter’s Moon rose on schedule Sunday night. At first I was too early to catch it, then I was too late. I tried to photograph it setting in the morning, but the light was wrong. Here’s one of the landscape shots I took while trying to capture the faint moon at dawn.

Some months it’s just not meant to be.

I can say that it’s been ferociously windy lately and so I haven’t been lingering outside. It’s a good thing we haven’t been planting, because the 40- and 50-mile per hour gusts would have ripped the seeds from our hands. Springtime here is windy. I think of it like lake turnover – all that cold air warming up and rising, a turbulent transition. It will settle soon.

In promise of that, this morning is gorgeous warm and still. Everyone is loving it.

Besides, it’s not like any of you called me on it. The full moon. All the blogging advice says you have to keep these contracts, to satisfy your readers. “They” also say you have to keep the same schedule. Then there are the massive exceptions like Allie Brosh at Hyperbole and a Half. She has only posted three times so far in 2011. Her third post, which went up last night, already has over six hundred comments. The love is not lagging.

Instead of the exception proving the rule (how I hate that line), the exceptions prove there are no rules, I think.

And that, every once in a while, it’s okay to miss the moon.

6 Replies to “Missing the Moon”