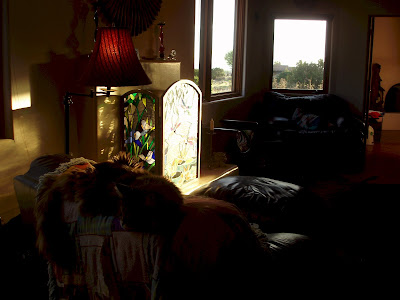 The longest day of the year, somehow both Midsummer and First Day of Summer. Thus do science and tradition collide.

For the last couple of days, the setting sun has come squarely in our western bedroom window and cast long rays right on the fireplace screen on the living room kiva. Our own Solstice calendar it seems.

Our builder was Norwegian and I wonder if he aligned it that way on purpose.

The new novel, Sterling, has been hurtling towards a Midsummer Solstice festival since the beginning. Maybe hurtling is the wrong word. Creeping slowly towards. Reluctantly, but with fascination. Now my own reality has gone past the moment in the book. Which should mean nothing, except I can’t quite shake the feeling that I’m having to catch up now.

I worried about not writing while I was at my mom’s. I knew I wouldn’t get to and I thought the hiatus might knock me out of my rhythm. Instead, it turned out to be a good break. I wrote yesterday with a sense of the well being full and cool. It helped that I had hours of driving while David studied, to mull over the plot. I know now the sequence of remaining events. Though I woke up this morning realizing I hadn’t accounted for one plot thread.

It’s in my head now, though.

It’s always tempting to see Summer Solstice and 4th of July weekend as the Summer being half over. Which is funny because most of us in the US anyway think of Summer as June, July and August – partly due to growing season, partly due to school calendars. By that measure, Solstice is neither the beginning of Summer, nor the middle, but somewhere just shy of the first third.

Demarcations and divisions to measure the progress of the year.