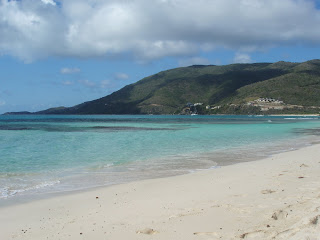 I’m catching you up now from our hotel room in San Juan.

So close, and yet so far from our Caribbean beaches.

So, on Monday, we went to breakfast and awaited the Phone Call. Sure enough, Little Dix called and said we could do the 11 am glass-bottomed boat ride. We bundled up our things into the Jeep and headed over to the fancy side. However, when we presented ourselves, it turned out the captain wasn’t coming for just two people. Maybe we could go on Wednesday. I explained we were leaving Wednesday, though we didn’t know exactly when. Our original flight from Virgin Gorda had been at 4, but Air Sunshine had yet to tell us The New Plan.

Did I mention Little Dix is a class joint? They gave us free Mango Coladas at the pool bar for our trouble. 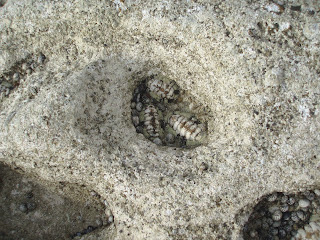 And then we went to the beaches. Long Bay is a beach-comber’s delight, with nifty critters fossilized into the rocks. Shells are everywhere. Snorkeling was great there and at Savannah Bay.

We took time out for lunch at Leverick Bay resort (where we saw the Jumbies). Did you know there are Kobe beef hot dogs? Delicious, too 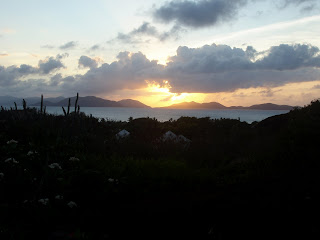 Both beaches are sunny and exposed, so we dragged ourselves home, sun and salt-bleached, to grill shrimp on our little barbeque grill.

Tuesday morning, we finally found out that Air Sunshine intended to put us on a 12:30 flight out of Tortola, which meant we’d have to leave on an 8:20 ferry.

At which I commenced whining. For good or ill, while I could call and pester Air Sunshine (Lord knows how much those calls cost me), they couldn’t seem to call me. So they called Guavaberry, who were good advocates for us. Finally the bearers of sunshine agreed to a 4pm flight, but we had no choice but to take an 11:20 ferry to get there. If we took a later one, we’d have to deal with Road Town and the transfer to the airport.

Too late for the glass-bottomed boat tour.

And here I’d had my heart set. You see, David is not a strong swimmer. (Chalk it up to childhood lessons in a city pool filled from snowmelt.) So he can’t swim in the deeper water and see the really cool fish. I so wanted him to be able to see it. I might have shed a tear or two. 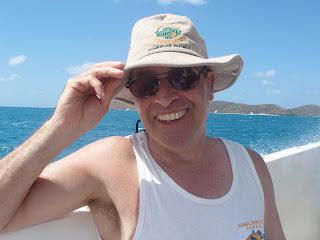 Then David had the brilliant idea of calling the captain directly. It’s hard to say who it was more for at that point – for David or for me-for-David. But it worked! The guy said if we came to him, he’d take just the two of us out.

Not super-easy, but not hard. We zipped over to the jetties at Gun Creek and caught the hourly free ferry over to the Bitter End Yacht Club – an all-inclusive resort on its own little island. Most of our fellow passengers were locals who work at the resort.

Not a bad commute. 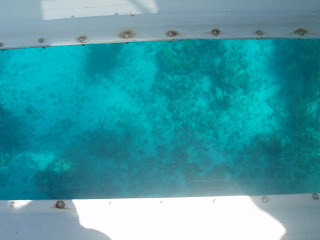 The tour was wonderful. I even saw a sea turtle, which I’d not long before told David I no longer believed in, since I’d snorkeled in all these sea turtle places without seeing one. Then we had beers and calamari while we waited for the five o’clock ferry, which was packed with housekeeping staff and other resort workers heading home in end-of-day merriment. 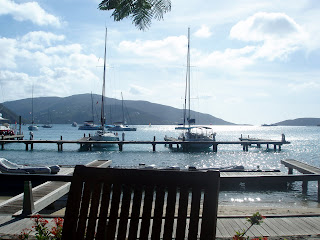 Last night we went for a return dinner at Copper Mine. This morning we went for a last swim at Spring Bay and drove to the ferry landing (just past the harbor where we arrived, we were told).
We left our Jeep, unlocked, keys in ashtray, as instructed.

The ferry people knew nothing about our Air Sunshine deal, so we had to pay the $40 fare.

And we ended up in Road Town. We were *supposed* to take the OTHER ferry, the Air Sunshine woman irritably told us. The other one that also left at 11:20, of which there was no evidence. Now we’d have to take a taxi.

So we ate lunch. And shopped a bit in Road Town. We arrived at the airport around 2:30. No one was at the Air Sunshine desk, so we sat in the outside cafe and had a Coke. The Air Sunshine woman spotted my suitcase – which is really funny, for those of you who know what it looks like – and came to fetch us. 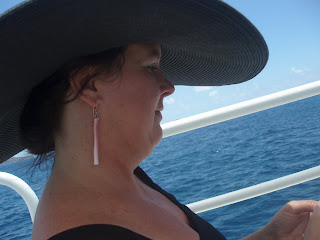 We were to check in or we’d get left, she said. I said the plane was for 4pm, wasn’t it?

Or earlier, she said. The pilot had just left San Juan, so would arrive soon.

They bundled David and I onto our private plane at 3:30. They walked us out, pulled the arriving couple off and popped us on.

I watched the other couple walk in, thinking that had been us, just a week ago.

But it’s good to go home while you’re still having fun. We’ll take our chain of flights home in the morning. Soon I’ll be back to it. I’ve been turning Sterling over in my mind and I know where we’re going next.

Vacation is over. I’m ready.

2 Replies to “But If You Try Sometimes”