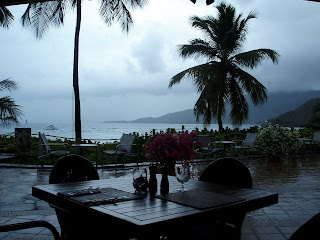 I skipped posting yesterday, for no particularly good reason.

Actually it all started with breakfast at Little Dix Bay on Sunday, so I’ll start there.

As I mentioned on Sunday’s post, it rained all night Saturday night. Torrential, cooling, tropical rain. It still rained on Sunday morning, so we slept longer, listening to it fall through the broad leaves. And then we decided it was an ideal morning to have breakfast at Little Dix Bay, which is the high end resort on the island. We stuffed ourselves and watched the gentle rain fall. Then we walked on the beach, which is endless. We were the only people on it, because rain is apparently poisonous to tourists. 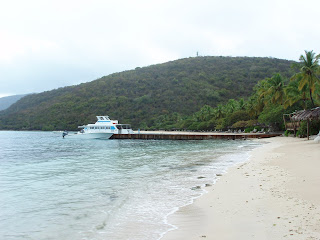 Little Dix is so sauve, they give you a little photocopied mini-version of the New York Times. We read the articles while we lingered – and noticed they offer a glass-bottomed boat tour. We asked if we could do the Monday one, they said yes, if enough people signed up and they’d call. 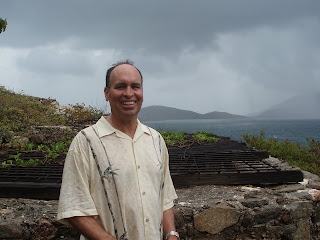 We noodled around the island for a bit after that, visited the ruined copper mine and looked at houses for sale, debating the pros and cons of each. None have asking prices on them. 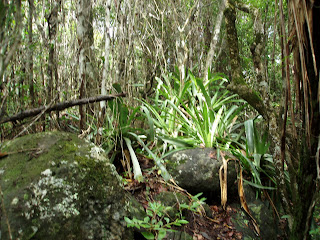 Then we hiked up Gorda Peak.

Up very slimy hill. Through jungle. We saw a soldier crab, several giant hermit crabs and nearly stepped on snakes three different times. It was a bit unsettling. 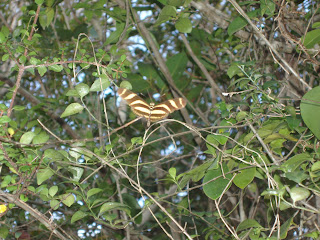 We also saw these yellow and brown butterflies, that we think are zebra butterflies, though the colors are wrong. They have this lazy, languid way of flapping through the heavy moist air.

And, of course, the view from the lookout tower at the top was incredible. 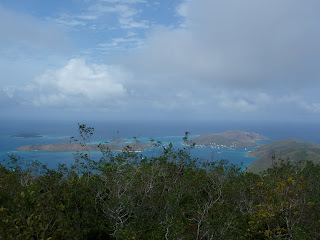 We investigated some new beaches, ones we returned to yesterday, so I’ll save those pictures for now. 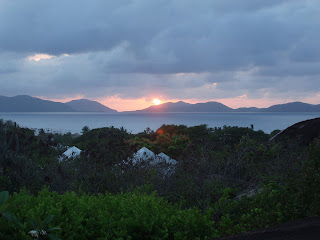 Sunset found us on our deck again. Then we went to the Copper Mine Shaft Cafe for an incredible meal – and really strong drinks. If you have occasion to drink a Caribbean Blue Martini, resist the urge to have more than one. 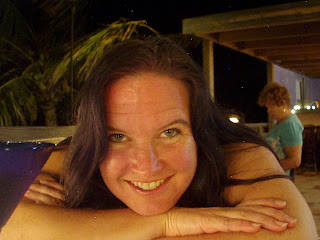 The best part was a Cambridge professor and his wife who live here now showed us the Southern Cross on the deck. We’re only 18 degrees north of the equator here. I had no idea we would be able to see the constellation so easily.

It was thrilling, actually. And I didn’t have to go to the Southern Hemisphere to see it.

When we got back to our Guavaberry Hut, a little dog greeted us as if we were his returning owners. He came right inside. His tag said his name was Humpty, with owner’s name and location on the other side of the island. His tag also said: “I wander. Love me. Feed me. Release me.” 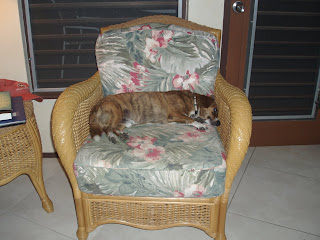 I gave him some water and he politely asked if he could get in the chair. I patted the cushion and up he leapt to spend the night. In the morning he wandered off.

We left the house more expeditiously than usual in pursuit of the glass-bottomed boat tour.

A story for tomorrow.

Oh – and last night? We found the Southern Cross in the sky from our own deck, now that we know how to look.