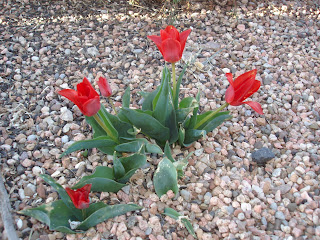 It’s amazing to me to see the flowers pushing up through the gravel of our desert rock garden. All through the hot days of last summer, the warm fall and sere winter, there was no sign that there could be tulips.

Suddenly, there they are!

Lots of writing pushes going on right now for some reason. Maybe everyone is realizing we’re already through the first quarter of 2010 and wondering what they have to show for it. Now the sun is warming, the flowers blooming and all that work you figured you’d get done in the dark days of winter? Not so much?

So the RWA PRO group is having a 50K challenge this month. And there’s this Thor’s Challenge of 25K in 25 days. Another gal announced she’s 200 days into writing at least 100 words per day. Everyone wants to beef up those wordcounts.

Speaking of which, I discovered this week that my scene break set of symbols “* * *” actually count as three whole words in MS Word. When the clock is ticking and the words aren’t flowing and you’re struggling to hit your 1K for the day, it’s really tempting to stick in a few extra scene breaks. Everyone loves a scene break, right? Maybe I should develop a fancier scene break indicator, like

Isn’t that pretty? And it would be SEVEN words!

Of course, that’s not really the point. Which is the thing to bear in mind. Wordcount goals and challenges can be great to motivate a writer to keep her butt in the chair and put the words on the screen, but what truly matters is what words they are. Even if you do fast draft and edit later, eventually quality trumps quantity. The NaNoWriMo folks are all about pushing you to finish a novel, which can be a valuable exercise. (Of course, they count 50K as a complete novel, which it isn’t — you need at least 80K, really — but I’ve complained about that before, so I’ll shut up about it now.) So, one thing the NaNoWriMo folks say is that, if you’re stuck, you can have your characters sing something like American Pie. I haven’t heard how many words that ends up adding to the story, but it’s a considerably long song.

Depends on what you’re trying to do. If you want to prove to yourself that you can put down 50,000 words to form a storyish type thing, then sure. Is it a novel when you’re done? Well, I can tell you right now that you’re going to have to cut out the song lyrics, since the royalties to directly quote songs are off the charts, so to speak.

Yeah, in the editing phase.

My point being, why put something in to pad the wordcount if you *know* you’re going to take it out in the final product? That’s just indulging yourself as a writer and not really working for it.

This has been a slow writing week for me, wordcount-wise, largely because I’ve been going back and reworking. KAK has been giving me great feedback on the Sterling New Novel.

(Did I mention that one of the agents who read the full of Obsidian and was *this* close on it loves the concept of the New Novel? She called it a “sterling idea.” So I think the new code phrase for it is Sterling. Even though that has nothing to do with the story. It makes me happy to look at it.)

So I’m working it up, hitting plot snags because this world is complex and – oops, I violated my on physical laws already in Chapter 8 – so I had to fix that thread. I’m shifting a few scenes around and adding in important information. I’ve made a lot of progress this week, just in a way that can’t be measured by rising wordcount.

You know the concept I mean: the Taoist symbol of balance. Yang is active, male, thrusting out and growing; Yin is resting, female, drawing in and nurturing.

Accumulating wordcount is yang, then. Editing, the trimming back, in yin.

Those dark days of winter when you didn’t do much but eat and sleep? That’s a restorative time. The resting and rebuilding allows for the explosion of Spring yang.

The tulip bulbs hid under the rock for nine months or more, then burst through in a blaze of red.

Both phases are equally valuable.

3 Replies to “Yin, Yang and Yahoo”