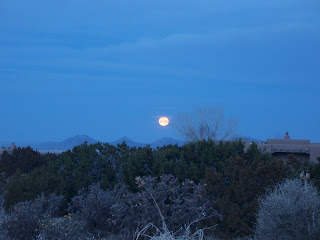 If the Harvest Moon rises like a big pumpkin, then the Worm Moon sets like a peach. The April moon is the Pink Moon. We’ll have to see if it’s any pinker than this.

I wasn’t on the internet much over the weekend. Not really on purpose. On Saturday I did my writing and booked out fairly early for a day of power-shopping for patio furniture with a friend, along with lunch at the Guadalupe Cafe. It involved a lot of back-and-forthing and comparisoning. By the time I got home, with an enormous box of pool lounger wedged into the back of the convertible, I was tired. We did cocktails and movie-watching.

Never did turn on the laptop again.

Then Sunday was for grocery-shopping and the purchase of the rest of the patio furniture that I hadn’t wanted to go back and buy on Saturday, because it would have meant leaving the aforementioned enormous box in my convertible in the parking lot. Then there was yet another trip back and forth, attempting to wedge more enormous boxes into too-small vehicles.

After that I spent the afternoon assembling patio furniture, hanging outdoor art and cleaning up the yard. It felt good to be outside in the sun. I learned how to drill through stucco. I did not do anything on my electronic To-Do list.

And it was good.

Someone mentioned on Twitter the other day that people had noted conversations were slow these days. Being my flip self, I asked if she meant the people or the medium. She said both. Then offered that perhaps, with the warming weather, people were spending more time outside.

That’s okay, I think. It’s good to walk away from the internet and spend some time in the sun.

I’ve received a lot of interesting feedback on Saturday’s post about Kindle vs. iPad. The comments on the post give good insight to the mind of the reader. On Twitter, one techie blogger said that I might be the first person to fault the iPad for allowing me to multitask, but also called my post an “intelligent article.” So I didn’t say that I can hardly be the first to think so, I just might be one of the first to publicly complain about it.

I was surprised though, how many people contacted me to say they agreed – that for them reading is the last refuge from multi-input activities. It’s a time to settle and concentrate on one thing.

It should be noted these are all readers. People who love to read and want to enjoy it.

RoseMarie sent me this really interesting study that she thought would shed some light on the real market for the iPad. She’s right: they want the universities. The study tested out what would become the Kindle DX in several college classes. This is an interesting finding:

During the time of the study, the retail price of the Kindle DX was $489. Other eReader pricing varied from $199 to $859.13 When students were asked if they would purchase a Kindle DX (or other dedicated eReader) for academic use, they indicated that the price would need to drop dramatically –– to less than $100 –– in order for them to seriously consider purchasing one. However, many students suggested that they would be willing to spend considerably more for a multi-function device, such as a tablet or netbook, if it eliminated the need to own a laptop (and if it were as comfortable as an eReader for prolonged reading).

A couple of other things to note from the study are that students found they concentrated better with an eReader that removed the temptation to check email or surf the web and that some of the students noted that they didn’t experience eyestrain reading on the computer. That’s notable to me because Kev has argued with me that it’s a generational thing, that the younger people don’t mind reading on the computer. I think eye strain is eye strain and they’re just still too young to really feel the impact. But we shall see.

What’s becoming clear to me is that the recreational reader isn’t really on the marketing radar here.

I don’t want to become yet another person proclaiming the death of publishing, but I think this approaches the core of the issues with books and readers. The people who sell stuff, the black-magic marketers, want to simplify books into a commodity. That’s their job. Sell the product they want to sell for the price they want. But books don’t fall neatly into the commodity-niche. They are essentially immaterial – a story, a feeling, a time in a different head or a different world.

Reading is, in the end, solitary and intimate.

Maybe I’m naive, but I’m not sure I believe you can sell that.