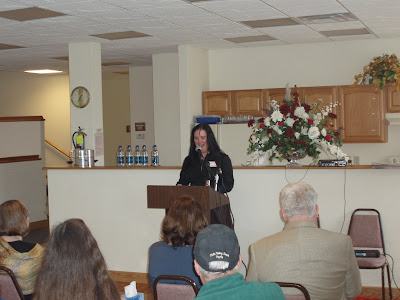 I have a thing about acceptance speeches from the literature laureates.

Okay, granted, I have a thing about a lot of things. Sue me.

And don’t blame me for fantasizing about what my own laureate speech would be. We all have our little daydreams, right? Never mind that genre isn’t the way to go, if one wants enduring awards.

In fact, I have a little faux-scroll in my writing studio of William Faulkner’s acceptance speech. (Okay, I used to have it up, then, when we moved, it seemed to garpy to put up again, but now I’m reconsidering. Not the least of which because I’ve now had to Google it, so I can share it with you, and the interwebs are running slow and cobwebby just now.Google is apparently afflicted by blizzards. Or Qwest is. We’ll never know.)

Minutes and minutes later — oh, the lack of instant gratification! — here is the bit I wanted to share:

It is easy enough to say that man is immortal because he will endure: that when the last ding-dong of doom has clanged and faded from the last worthless rock hanging tideless in the last red and dying evening, that even then there will still be one more sound: that of his puny inexhaustible voice, still talking. I refuse to accept this. I believe that man will not merely endure: he will prevail. He is immortal, not because he alone among creatures has an inexhaustible voice, but because he has a soul, a spirit capable of compassion and sacrifice and endurance. The poet’s, the writer’s, duty is to write about these things. It is his privilege to help man endure by lifting his heart, by reminding him of the courage and honor and hope and pride and compassion and pity and sacrifice which have been the glory of his past. The poet’s voice need not merely be the record of man, it can be one of the props, the pillars to help him endure and prevail.

I know, it’s ironic this means so much to me. Words from a man who would undoubtedly not include womens fiction, speculative fiction or sex/magic fiction as emblematic of compassion, sacrifice and endurance.

And yet, aren’t these the traditional female qualities?

Faulkner is all about the man. That was his era. We can forgive him and understand that women were meant to be included in this umbrella term.

We were. Meant to be. Right?

Okay, well, this really started with the speech from 2009’s Nobel Prize Winner for Litachur: Herta Mueller. What she said that struck me:

Can we say that it is precisely the smallest objects—be they trumpets,
accordions, or handkerchiefs—which connect the most disparate things in life?
That the objects are in orbit and that their deviations reveal a pattern of
repetition—a vicious circle, or what we call in German a devil’s circle. We can
believe this, but not say it. Still, what can’t be said can be written. Because
writing is a silent act, a labor from the head to the hand.

I feel like she’s speaking to me. To my small objects.

There’s this long, old debate about the things men write about versus what women write about. You can see it here, though you can blame it on era, if you like. The last worthless rock on the last red and dying evening compared to the handkerchief one’s mother mentions.

In the end, writing is, indeed, a silent act. That’s a profound thing, since it’s an echo of speech. It’s interesting to me that both laureates, sixty years removed, with gulfs of gender and culture between them, focus on voice.

Which, for those paying attention at home, is a spoken thing.

Maybe it’s not what we have to say, so much as how we say it.