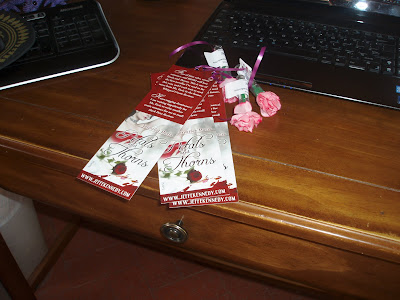 Yeah, it’s that time of year again. The time when grown women camp out on the living room rug and play with ribbons, hole-punches and silk flowers.

Being a writer is a pretty good gig.

Last night I assembled these, so I can ship them off today. No jump drives this time – just little bubble bottles, which is fun. And considerably less expensive, especially considering I’ve got 240 of the little cuties. (I was going to call them “suckers” and changed my mind.) The labels also say that Sapphire is coming soon.

It ended up being a family effort. David helped me wrap the labels around the tubes and attach the ribbons. At one point he informed me there is no such thing as an incorrect job, only unique ones. The kitties helped, too. If you get one with a ribbon that looks a bit gnawed on, well, that makes it extra special.

Zip didn’t help because there was a thunderstorm in the movie we watched, so he had to take cover.

It’s funny thinking about that Petals and Thorns has been out for nearly a year. July 13 is her one-year birthday. Last year, the RWA convention was a month later (actually this year is a fluke and is occurring a month early) and so I was there about two weeks after Petals and Thorns released. Once there I thought, golly gee whiz, I should have done some promo, but it flat out didn’t occur to me.

Part of is was that I didn’t get my cover until about a week before the release date, so it would have been tight.

But I also think that I didn’t really value this little book. It wasn’t a Big 6 book deal. It wasn’t one of my novels. It certainly didn’t compare to what some of my friends were going to convention with.

Now, a year later, I’ve seen how well Petals and Thorns has done. The reviews, the private messages, the sheer enthusiasm of the readers – well, it’s all been just lovely.

So this will be my last big push for her and it’s really mostly to scatter rose petals for Sapphire‘s debut. Hopefully Petals and Thorns will win some prizes this year, receive her tiara and have her promenade down the cat walk.

It’s been a good year.