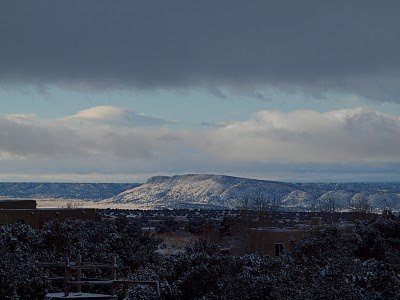 A brief clearing this morning in the storm. I love when part of the valley has sunshine while another is shadowed. Seems metaphorical to me.

Last night I caught up on blog-reading. I follow a lot of blogs – more than the ones I list on the blogroll to the side there. Those are my favorites. Some blogs I follow just to be supportive. I’ve never unfollowed, but I do stop reading if the blog doesn’t sing for me. Some I think are hit or miss.

Normally I use Blogger Dashboard to read recent posts. It shows me all the blogs I follow that have new posts, in chronological order. Most days I scroll through those to see what’s new. Some I read every new one. Others only if that particular post looks interesting. I confess – some that annoyed me, I hid from my feed.

Because I was catching up though, this time I clicked on each blog, which then shows me a list of their recent posts. It ended up being a good year-end clean-up because a surprising number hadn’t posted in 6 months, 9 months, even a full year. Several of those were blogs where the writer posted once or twice and never again.

This time of year, everyone is talking about New Year’s resolutions. People are making plans for 2011, citing what they’re determined to do. More than a few that I’ve seen mention posting to their blogs more often. I know a few more people than that who really angst over getting blog posts up.

It reminds me of the gym, really.

I’ve been a regular exerciser for about four years now. As in, going to the gym to work out, exercising. Before that I was in Kung Fu classes nearly every night, but that’s a whole ‘nother kettle of fish. But a few years ago, several things came together – quitting Kung Fu, my middle age, a physical condition that was not, erm, lean. So I became Morning Gym Girl.

No, this was not natural to me by any stretch. I exercise first thing in the morning because I’m too sleepy to think up excuses not to. There it is.

At any rate, David and I noticed the classic New Year pattern. After January 1, the gym was filled to bursting with enthusiastic exercisers. There would be the overweight middle-aged guy, accustomed to success, determinedly jogging endless laps on his first visit, face crimson. He’d show once or twice and never again. There were the high school girls in their pajamas, who started showing later and later, then not at all. Some persisted, yes, but usually by March the gym was back to the normal numbers.

There’s this whole thing about “don’t start what you can’t finish” or, worse, “you must finish what you start.” I’m not saying that. Making a change, starting a new blog or a new exercise program is a big thing. We try all kinds of ways to make it not seem quite so daunting, but few of us have empty space in our lives just waiting to be filled by a new task. Usually something else has to go. Usually that’s the painful part.

When new exercisers ask me how long it’ll be until they stop hating going to the gym, I tell them it took me six months. Six very long months before I stopped hating it and started to enjoy it. Some days I still hate it.

But it’s important to me. So I keep doing it. Day after day.

I suspect those qualities – the ones that keep the person blogging day after day, writing their novels, sending their queries – those are what make the successful author.

Not a New Year’s Resolution, but a New Life Resolution.

We’re in it for the long term.