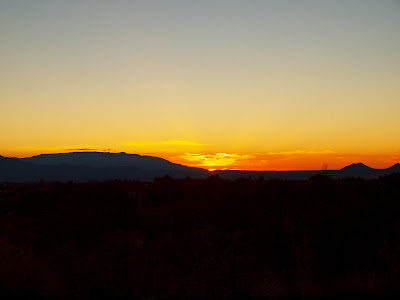 A quietly intense sunset last night. A storm is coming our way that’s meant to last several days. No more clear skies for a while.

Because it’s to get snowy and blustery, David and I went out to dinner last night. On New Year’s Eve we’ll stay home. That probably makes us sound like fuddy-duddies. But I really wanted some time to walk around the Santa Fe Plaza to see the lights. This is not nearly so much fun in bad weather. We had drinks at one of our favorite bars and then dinner at Luminaria. This way we got to indulge in their really wonderful menu and not be limited to the New Year’s Eve prix fixe menus everyone does, which never seem to be as good. And we didn’t have to worry about road stops or drunk drivers. Friday night we’ll do our little tradition of lots of hors d’oeuvres and non-stop movies.

Yesterday I mentioned that I hadn’t even thought about any of my now-several works in progress. Marcella (who I see hasn’t posted to her own blog since November 9, but her first book just came out, so she can be forgiven) asked me what it was like for me, getting back into it.

Specifically, she asked me if it looked a bit strange at first. Which was funny to me because it really did.

I opened up Sapphire, read the first line, which I’d last read – and edited – just a week before, and it was like I’d never seen it before in my life.

I went back and read the revise and resubmit email from the editor who’d read it, to reground myself in the changes she’s looking for. I don’t know that I needed to, because a big piece of me was nodding, saying “yeah yeah yeah.” Okay, I’d read it a bunch of times before and had already started the revision.

Still I didn’t quite have my head where it had been.

So I started reading. I figured the edits would come, which they did.

The advantage of having that time away is it does create a very useful distance. I could read the story more like a reader would, which helps me see what information I’m giving or withholding. When I write the story, it’s playing out in my head. I’m seeing through the characters’ eyes and describing what’s happening to them. This kind of thing makes it easy to leave out important information. Sure, I feel what they do, but do I describe it so someone else understands?

The downside is I miss the dreamthink (which I’ve talked about before here and here). The dreamthink allows me to swim in the story and not have to, well, work at it so hard. I dream at night about my characters. I wake up in the morning with the story spinning in my head. Ideas for it pop into my head throughout my work day. It’s kind of like part of me is running a subroutine.

Unfortunately, to extend the analogy, that subroutine absorbs a lot of disk space. I find that when I’m heavy into dreamthink, I don’t have a lot of brain power for much else. Sometimes I think that I’m so weighted in right-brain, hey-we-got-no-rules, wow-man, everything-is-beautiful activity that the left brain stuff gets rusty. Pulling out my logic and math feels more difficult. Also employing those extrovert skills.

I can’t really be in dreamthink and be around people. Not counting David, of course. Though he’ll occasionally point out I haven’t spoken aloud in hours. That’s why, when on a family visit, I don’t even try.

So yes, Sapphire did look strange. But, like picking up a book you started a while ago and set down, after a few pages the story drew me in again. I’m about 10% through the revision now.

It feels good to get in the swim again.

3 Replies to “Strangeness and Dreamthink”